During the night of the Tenkaichi Festival at the hotel, the author named Satoru Imatake is brushing his teeth in the bathroom and his friend named Norikazu Sasai is making a mess. When he checked what Sasai's doing, he's confused that Sasai dressed up weird and saw that the hotel room was a big mess. Sasai raises his gun to aim at Imatake's forehead and fired. He also took the rest of the money from his wallet.

While at the Tenkaichi Festival, Ran, Conan, and Kogoro are having a good time. Sasai just finally arrived at the festival while sweating. He found Ran and asked her to take a picture of him behind the background of the mountain that says, "Ichi" so Sasai gives the camera to Ran and Ran takes a picture. Sasai tells Ran that he's collecting an archive based on the theme, "Local Festivals" which is the photo that Ran took. Ran realizes that he's an author. Sasai also told Ran that he writes with the pen name, Tomokazu Imai. After Ran hears that, she got excited that she read about it while at junior high. Kogoro thinks it's strange because he mentions that name was used by Satoru Imatake when he made his debut. Sasai also told them that he's a friend of Imatake and he will drink in celebration for Imatake's Naomoto award. Suddenly, Sasai's sweating more because he's wearing a white jacket. After the conversation, Sasai asked Ran if she could take more pictures of him around the festival and Ran doesn't mind at all. While she's taking pictures of Sasai, the man just appeared behind Sasai. The man's name is Yokomizo, he's a policeman. He wants Sasai for questioning because Imatake's been murdered at the hotel where Sasai is staying.

Conan, aiding Inspector Yokomizo through Kogoro Mouri, proved that it wasn't just a simple case of robbery and that Norikazu Sasai was indeed the killer. Imatake was murdered while brushing his teeth, an act done without inhibitions in front of people whom a person is very familiar with. The bad condition of the room was evidence enough that the robbery was a setup, for the killer fled the scene right away after the gun was fired.

And the pictures that were seemingly taken that night proving Sasai's innocence were actually taken from the past Tenkaichi festival. In the picture, his wrist was captured without its current watch tan line. He also did not change his clothes to create his alibi, as he wanted his clothes to match what he wearing in the photos taken years ago.

Over a year ago, Sasai felt ridiculed when the more well-known writer Imatake's work was chosen to be published over his at the last minute. Imatake apparently became famous when he won an award for a book that they co-wrote, while Sasai wasn't credited for it.

Sasai planned the murder, so that he could take Imatake's place as top writer in the literary world.

A remastered version of this case was aired on February 25, 2017. 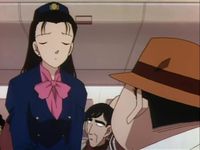