Ran and Conan enjoy the view from a luxury cruise ship, whose owners are charitably giving them a ride back to Tokyo since Kogoro forgot the departure time of their original boat. Ran and Conan notice another passenger, Natsue Hatamoto, who just married her husband, Takeshi, on the island they just left. Natsue's grandfather, Gozo, the head of the Hatamoto family and businesses, rants at his son-in-law, Kitarou, for allowing non-family members onto the ship. Natsue's uncle, Joji Hatamoto, muses that Gozo's bad mood is likely from Joji cooking Western rather than traditional food. Gozo also belittles Kitarou's son, Ichirou, for being an artist and pursuing a hopeless dream. Gozo then orders Takeshi to come visit his room before dinner, and leaves. 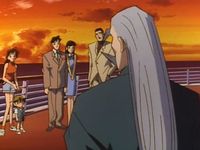 Gozo orders Takeshi to come visit his room before dinner.

After he leaves, the disdain his descendants feel for him is revealed as Kitarou's wife/Gozo's daughter Mariko, Natsue's older sister Akie, and Akie's husband Tatsuo, argue over who will inherit everything after Gozo finally dies. Akie whispers shocking information to Mariko and mentions that there is only the twenty-four hours of the cruise to try to change anything.

Meanwhile, Gozo confronts Takeshi over the fact that Takeshi's identity is fake, and demands to know how he intends to avenge his father, though how Gozo wronged Isao Zaiki is not mentioned. Takeshi does not answer, but someone in the shadows overhears the conversation. As the family assembles for dinner, the butler goes to summon Gozo and finds the flower that Natsue gave Takeshi earlier just outside the door. Takeshi arrives at dinner a bit late and says he was thinking alone in his room, just before the butler's yell summons everyone to discover Gozo's dead body.

Kogoro confirms Gozo's death, to Natsue's dismay, and declares that he died approximately 40-50 minutes ago. 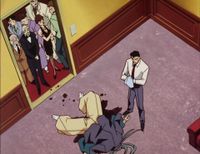 He confirm Kenji's alibi, and that the locked door and lack of a weapon mean imply murder. The family argues suicide, but Conan proves that it was murder by the blood spatters on the doorframe that could have only have occurred with the door open. After being stabbed, Gozo closed the door and locked it from the inside, but then died from blood loss. The timing, however, means the culprit could have been anyone not in the dining room 40-50 minutes ago, which leaves the entire Hatamoto family but Natsue.

Kenji reports that the only unusual thing he noticed was a flower in front of the door—the flower Natsue had given to Takeshi. Takeshi denies guilt, but Mariko reports overhearing his conversation with Gozo about how he was son of a Zaiki Isao, a business rival who committed suicide after the Hatamoto group took over his company. Takeshi confessed to being Zaiki Takehiko, but denies having murdered Gozo in the face of repeated accusations from the Hatamoto family members, and Natsue's heartbroken doubt of his innocence. Conan ignores the drama to inspect the scene, and discovers something odd in the blood spatter.

The odd thing is a bloody piece of bread crust. Conan learns from Kenji that the wedding meal included french bread made by Joji, chef and manager of a french restaurant. Gozo hated Western style food, but any of the family ate and could have dropped the bread, and Joji owns cooking knives. Takeshi is locked in a storeroom to await arrest when the ship docks in Tokyo. The family minus Natsue, who has run off alone in distress, discuss the inheritance (and inadvertently reveal why they could benefit from Gozo's death), until Kenji reveals that rather than defaulting into division between members, a will designates Natsue as sole heir. No one takes the news well, though Kogoro tries to keep them calm. The most upset one is Tatsuo, who reveals that he only married Akie to try getting money out of the Hatamoto inheritance. Akie, who clearly didn't know that, is completely shocked.

Ran and Conan find Natsue outside, afraid she can't trust Takeshi to have loved her. Ran encourages Natsue to believe in him. Conan hears strange sounds - a splash, and then a dull thud - from the lower deck, and after a moment he, Ran, and Natsue investigate only to find Tatsuo dead.

The family gathers at the scene, with Akie tearfully holding her husband's corpse then thinks to check whether Takeshi is still confined; Kogoro or Conan find the storeroom unlocked and empty. 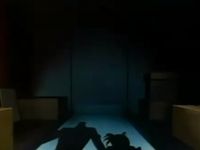 Conan found the storeroom door that is unlocked, making it seem that Takeshi have escaped.

Kogoro and Conan return to Hatamotos and explain that Takeshi is likely out to murder the entire family as revenge for his father, shocking everyone especially Natsume.

After reviewing the crime, Kogoro suggests they should gather for the rest of the night together in the dining hall, to keep Takeshi from murdering anyone else. Akie and Mariko blame Natsue for giving Takeshi access to the family, but Conan interjects that Takeshi's guilt isn't proven, because the room had to be opened from the outside, as it was a sliding lock, not one that required a key and therefore could be lock-picked. Someone had to let Takeshi out of the room, otherwise he would still have been in there.

While Akie and Mariko argue further about motives and blame, Ran notices Ichiro's sketches of Natsue, which embarrasses him and bring him to Akie's attention. She accuses him and Kitaro of having motives to kill both, before Kogoro interrupts and orders everyone to calm down. Ichiro leaves to use the restroom. While he's gone, Joji suggests that Tatsuo may have let Takeshi out himself, with a plausible reasoning; with his usefulness expended, Tatsuo was likely killed to prevent interference. Suddenly, a blackout occurs. Kogoro sends Ran and Conan to check on Ichiro while he restores the power, and they arrive to find Ichiro alive, but stabbed in the leg. 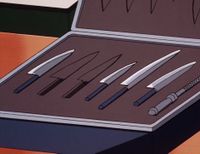 Ichiro denies having seen his attacker, but the knife on the floor is engraved with Joji's name. Joji claims the dining hall as an alibi for everyone but Takeshi, but Kogoro reveals that the blackout occurred on its own due to a timing device anyone could have set up. Conan studies the device carefully while Kogoro promises to find Takeshi. The family remain in the dining hall while Kogoro, Ran, Conan, and Kenji search the ship, including the rooms.

In Kitaro's room, Kenji mentions that Mariko and Kitaro are cousins, who were close since childhood and married despite Gozo's disapproval. Joji's room reveals that two knives from his collection are missing; Ichiro's room contains nothing besides an easel sketchpad full of well-drawn pictures of Natsue and typical art supplies. The other rooms reveal nothing except for Akie's, where Conan sees something surprising in the closet but claims that nothing is there. Conan asks Kenji a whispered question that shocks the butler how he could possibly know a closely kept secret of one of the family.

Kenji's confirmation resolves the three incidents in Conan's mind, and he lures Kogoro back into Akie's room and knocks him out using Agasa's latest invention, the Stun-Gun Wristwatch. Conan tells Ran to gather the family on Kogoro's behalf, and drags Kogoro's sleeping form into a chair facing away from the door to look normal. Ran and the others arrive after Conan hides out of sight, and Conan uses the bow-tie to explain that he knows who the criminal is.

The killer was Ichiro Hatamoto, Gozo's grandson and Natsue's cousin and unlucky childhood friend. He had not straightforwardly intended to kill his grandfather, but after dinner they got into a very ugly verbal fight. Ichiro couldn't withstand Gozo's abusive treatment and attacked his grandfather, and in the middle of the struggle he took a knife that was on the table and stabbed him to death.

Once Ichiro realized what he had done, he started to cover his own steps by making everyone believe that Natsue's husband Takeshi (and his love rival) was the real killer. Takeshi himself had reasons to be angry at Gozo Hatamoto: his family owned a small business that was absorbed by the Hatamoto company (causing the suicide of Takeshi's dad Isao) and Gozo himself not only knew it but he abused Takeshi because of it, thinking that he was a mere gold digger (which he wasn't, since he did come to truly care for Natsue). Therefore, Ichiro easily dropped fake leads that led to Takeshi being blamed for Gozo's death, and later for Tatsuo's. 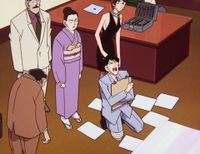 Ichiro Hatamoto was madly in love with Natsue, which was indicated when his sketchbook was revealed with nothing but drawings of Natsue.

Ichiro Hatamoto, as explained, was madly in love with his cousin Natsue, which was indicated when his sketchbook was revealed with nothing but drawings of Natsue. But Gozo had repeatedly said no when he asked him if he could marry her, and kept mistreating Ichiro afterwards. This time however, Gozo's taunts were directed to Ichiro himself, calling him a failure to the Hatamoto family and telling him to give up his dreams of being an artist, and to add further insult to injury he revealed to Ichiro that Natsue was already engaged to Takeshi. Which triggered Ichiro so badly that he completely snapped and attacked his grandfather.

It should be noted that in Japanese society, first cousin marriage is relatively acceptable and not that unheard of. (i.e., in real life ex-Premier Naoto Kan is married to his cousin Nobuko). Ichiro's own parents Mariko and Kitaro actually were first cousins and in love ever since they were teens: twenty-five years ago they did manage to get Gozo's approval for their marriage, but it actually took them lots of time and much pleading with the old man, who still treated his nephew and son-in-law badly. Therefore Gozo was furious when he saw that his least favorite grandson was developing feelings for his favorite granddaughter, whom he also had appointed as his only heir.