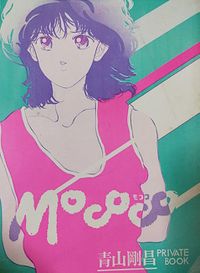 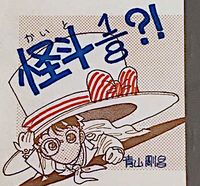 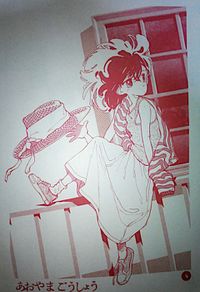 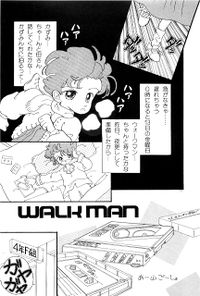 The Nekketsu Manga Konjō-kai (熱血漫画根性会 ,Hot-Blooded Manga Guts Society?), also known under its abbreviation Nemakon (ねまこん ,Nemakon?), is the manga research and creation club at the Ekoda Campus (Faculty of Fine Arts) of Nihon University. Gosho Aoyama and Yutaka Abe were members of it for a while during the eighties, who probably are some of their most famous past members, releasing some dōjin and commercially released manga works, as well as at least two animations. Pretty much all of these products have become highly obscure and are extremely difficult to come by. Abe was Aoyama's senior back then, but is an assistant of his and works on the Special manga, the movie manga and the novel illustrations nowadays.

Works created by Gosho Aoyama alone or in conjunction with Yutaka Abe as part of the Nekketsu Manga Konjō-kai, as far as they are known:

From 1986 to 1987, the first three chapters of this seven-part series were created, during which Gosho Aoyama assisted Yutaka Abe and which were published in the Shōjo manga magazine Missy. The story takes place at the Ekoda High School most of the time and Kaito Kuroba, as well as Aoko Nakamori got a small guest appearance in the third chapter.

In 1986, an animation was created under the direction of Gosho Aoyama and animated by Yutaka Abe, which served as a promo for Abe's manga 100% Tantei Monogatari. "Say Yes!" by Momoko Kikuchi was used as background music, who served as a template for the protagonist Momoko Aoyama and was Aoyama's favorite pop idol at the time.[1][2] Abe himself said that he can't release this and the other animation because copyrighted music was used without authorization, while the animations were made to be synchronous with it.[3]

Kaito 1/8?! (快斗1/8?! ,Kaito 1/8?!?) is the first of two small volumes about Magic Kaito, which Gosho Aoyama published independently of Shōnen Sunday on August 8th, 1987. It contains panels from the manga and some drawings that were specially created for this booklet.

Kaito 8/2 (快斗8/2 ,Kaito 8/2?) is the second of two small volumes about Magic Kaito, which Gosho Aoyama published independently of Shōnen Sunday on December 26th, 1987. It contains panels from the manga and some drawings that were specially created for this booklet.

Mococo (モココ ,Mokoko?) is a small collection of short stories that Gosho Aoyama drew during his university days, self-published in 1986, and which have not yet been republished anywhere else. Two of the titles it contains are HOLE and MAIL RUNNER, with the latter one apparently a science fiction story about a futuristic postman. Not much more is known about it, the few surviving copies are in the price range of up to 120,000 yen at online retailers (about 1,088 US Dollars in March 2021).[4][5][6]

A fanzine by Yutaka Abe, to which Gosho Aoyama contributed at least one illustration.[7]

WALK MAN is another short story by Gosho Aoyama that was published in Yutaka Abe's fanzine Bishōjo Shōkōgun (美少女症候群 ,Pretty Girl Syndrome?). Apparently some of Aoyama's friends and fellow students, besides himself, enjoy guest roles in this story in which they are threatened by a gigantic dragon. A text about Aoyama's dōjin Mococo is featured on a bonus page.[8]

Another animation directed by Gosho Aoyama and animated by Yutaka Abe was created for unknown advertising purposes.[2] "Jikan no Kuni no Alice" by Seiko Matsuda was used as background music. According to Abe himself, he cannot publish the animation because they've used this copyrighted music without authorization, while the animations were made to be synchronous with it.[3]