From Detective Conan Wiki
(Redirected from Tell Me A Lie)
Jump to:navigation, search

Throughout his years as a manga artist, Gosho Aoyama has created a handful of standalone short stories. The short stories have been collected and put together as a single volume a few times under the title Gosho Aoyama's Collection of Short Stories (青山剛昌短編集 ,Aoyama Gosho Tanpenshū?).

While on the run from some men dressed in black, Asami Ashikawa runs up a flight of stairs on a nearby building and discovers the Kirishima Detective Agency. She asks if anyone is there and explains that she's being chased. A voice answers her from the seemingly empty room. After searching the room, Asami discovers the voice came from a tiny man standing on a desk. The man introduces himself as George Kirishima just as the men in black arrive at the agency. George manages to distract them and yells for Asami to hit for the restroom. Pulling a cord hanging from the ceiling, the floor of the restroom gives way to a chute allowing George and Asami to land in a car waiting below. Will the two be able to escape the men in black this way? And why is Asami being chased in the first place?

Monster of the Ice Country[edit]

Asami as George's new secretary begins her day early by helping prepare breakfast for George. After George makes a negative comment towards her food however, Asami takes the plate away leaving George to go grab food from the refrigerator on his own. Thinking she had left the door ajar, Asami closes the fridge door trapping George inside. George begins to feel cold and lights a fire inside the fridge using his lighter. The fire causes some frost to melt, landing water on a cockroach on a lower shelf. Irritated, the monstrous cockroach chases after George. How will George get himself out of this mess?

George goes for a drive in his remote control Aston Martin only to have his drive interrupted when some boys decide to play with him and the car like toys. George manages to escape in the car and splashes mud from a mud puddle onto the boys driving them away. A girl George recognizes from the toy shop spots him and not wanting to be messed with, George splashes her too. George's victory is short-lived however when he discovers the he and the car are sinking into the puddle. The girl decides to rescue George and takes him home with her and dresses him up like a doll, forces him into a tea party, and play with her. Not amused, George attempts to sneak away while playing hide-and-seek only to discover the girl is being teased by some local neighborhood kids. How can George stop the kids when he's so little?

Play It Again (プレイ・イット・アゲイン ,Purei・Itto・Agein?) is a one-shot manga about Sanjuurou Tsurugi (剣 三十郎 ,Tsurugi Sanjūrō?) and his granddaughter Michiko Tsurugi (剣 道子 ,Tsurugi Michiko?). When Michiko beats Sanjuurou in a fight, forcing him to keep his promise not to go to her school for parent day, Sanjuurou lies down underneath a cherry blossom tree and wishes he could be young again. Much to his surprise when he wakes up, his wish has come true. This story was the prototype for Aoyama's Yaiba manga series.

Michiko Tsurugi refuses to allow her grandfather Sanjuurou Tsurugi to show up for parent day at her high school, causing him to make a bet with her. If she can beat him in a sword fight, Sanjuurou won't go to the school. Michiko tricks Sanjuurou by forcing him to chase her around a large cherry blossom tree, tiring him out so much that she easily wins the fight. Disappointed, Sanjuurou lies down underneath the tree and admires the fact that despite the fact the tree was planted when he was young it still blooms beautifully and doesn't look any different unlike himself and he wishes to himself to be young again.

When he wakes up, Sanjuurou decides to go to Michiko's school anyway to demand a rematch. When he arrives in her classroom though Michiko doesn't recognize him and Michiko's teacher tells him to change his clothes and to head back to his own classroom. Confused, Sanjuurou goes to look at himself in a mirror in the bathroom and discovers he's returned to being a teenager! While in the restroom Sanjuurou overhears Nakadai from the kendo club talking to his friends about taking advantage of Michiko as his next target. Can Sanjuurou protect his granddaughter from the lecherous Nakadai?

OVA Episode 12: The Miracle of Excalibur

This story was possibly the prototype for Aoyama's 3rd Base Fourth manga series. The story revolves around Minae trying to remove a bat which has been placed in the ground similar to Excalibur from Arthurian Legend, during a baseball game. When this story was adapted for anime, it was turned into a Detective Conan OVA titled OVA 12: The Miracle of Excalibur. In this version of the story Conan, Professor Agasa, and the Detective Boys appear and a jewel store robbery occurs. Also Kogoro believes that the Excalibur bat belongs to him.

The Santa Claus of Summer[edit]

The Santa Claus of Summer (夏のサンタクロース ,Natsu no Santa Kurōsu?) is a one-shot manga about a high school boy named Keisuke Hara (原 佳祐 ,Hara Keisuke?) who is dumped by his girlfriend and through an odd set of circumstances accidentally activates a weaponized satellite system that is set to destroy the Earth in 24 hours.

Keisuke Hara has just been dumped by his girlfriend who tells him not to call her anymore. Depressed, Keisuke goes for a ride on his motorcycle only to crash into two gentlemen, one of which is carrying a gun. During the collision Keisuke's telephone card and a man named Gray's card fall out onto the street. Gray accidentally grabs Keisuke's telephone card by mistake, thinking it's his own card, while Keisuke ends up grabbing the other card. Gray accidentally leaves behind edible alcoholic capsules which Keisuke mistakenly eats because he's hungry. It isn't until later that Gray discovers Keisuke grabbed his card, which is the activation key for a weaponized satellite system.

Drunk, Keisuke ignores his ex-girlfriend's request to not call her and mistakenly uses the activation key as a telephone card. Inputting his message to the ex-girlfriend, he activates a countdown for the satellite, setting Earth as its target. Much to Gray's dismay, because Keisuke was drunk he doesn't remember the passcode number he input for the satellite. Gray now has less than 24 hours to get Keisuke to remember by any means necessary, including enabling him to meet his favorite idol Asuka Anzai (安斎 明日香 ,Anzai Asuka?), or the Earth is doomed.

"Wait For Me" logo
Short Story Episode 1: Wait For Me

Wait For Me (ちょっとまってて ,Chotto Mattete?) is a one-shot manga about high school genius Yutaka Takai (高井 豊 ,Takai Yutaka?) who invents a time machine in order to go back in time and be the same age as his girlfriend Mamiko Abe (阿部 麻巳子 ,Abe Mamiko?) only for complications to arise. This short story was Gosho Aoyama's manga debut, published in Shonen Sunday in 1986. The short story was selected for Shogakukan's Shinjin Comic Taisho (Newcomer's Award for Comics) and launched his career as a manga artist.

High school genius Yutaka Takai is sick and tired of being called "young" and feels embarrassed about what people would think if he and his girlfriend Mamiko Abe, two years his elder, were seen together. To solve his problem, Yutaka builds a time machine with the intent of going back in time two years in order to be the same age as Mamiko. Mamiko expressed her concerns about there being two Yutakas around, but Yutaka explains that his younger self will simply be erased from the time-stream. While Yutaka is distracted just before using the machine, Mamiko takes the machine, sets the dial for the future, and jumps off the school roof, telling Yutaka to "Wait for me". Alarmed, Yutaka discovers that Mamiko has set herself forward two years in time and that everyone, including Mamiko's family, is beginning to forget she ever existed. If Yutaka forgets, Mamiko will end up falling to her death at the school two years later. Despite Yutaka's best efforts, he too forgets about Mamiko's existence, although two years later something seems to be nagging at his mind. What was the important thing he had forgotten?

"The Wandering Red Butterfly" calls Yusaku Kitakata while he's out driving around the city in his car. The woman gives him a cryptic message which Kitakata records and plays back, working through the message in order to finally meet up with her. 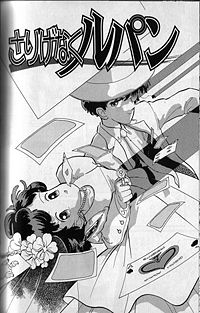 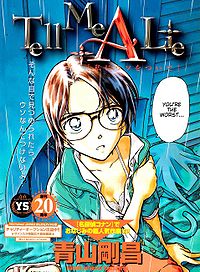 "Tell Me A Lie" title page

Note: Only appears in the renewal edition collection of short stories. Tell Me A Lie (〜私にウソをついて〜 ,~Watashi ni Uso o Tsuite~?) is a one-shot manga about a girl named Terumi Arai (新井 輝海 ,Arai Terumi?), who can read people's minds when she looks them in the eyes. The main character's name is a pun on the title.

She is saved from sexual harassment but is the guy really what it seems? And what is with the attitude of a guy who is moving away? 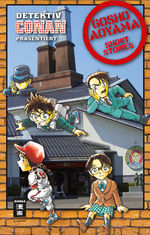 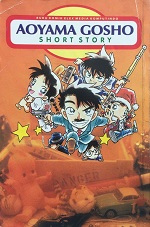 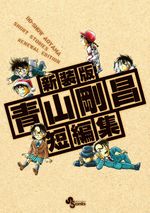