Masaaki Okakura (岡倉 政明[1] ,Okakura Masaaki?) is a minor Black Organization member who appears only in The Raven Chaser. 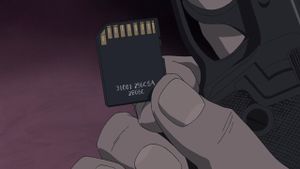 Masaaki Okakura is a minor Black Organization agent, disguised as a parliamentary secretary, very suitable for a NOC sent by the organization to inquire about senior government officials information. His position is not low working undercover as a civilian, but it is not enough to have a codename. He is from Tokorozawa, Saitama.

He carried a memory card containing their entire NOC list, perhaps seeking some sort of insurance as speculated by Vermouth. The organization had grasped the fact and planned to get rid of him shortly. However, he was first stabbed to death by the vicious serial killer Kazuki Honjou for merely self-satisfaction, blaming him to take up a space in the final elevator that was able to escape the fire that killed his younger sister Nanako.

His murderer has unknowingly made off with his purple amulet bag, one among the accessories often carried with the memory card. The boss orders his men to retrieve it before the police catch the culprit and look into the database. For Conan could just be the one single trump card that crushes them, but it was destroyed by Chianti with a shot.

Unlike most Black Organization members, Masaaki doesn't seem to be a very cruel person and he also has a thick side in obligation. Last year, on the first anniversary of her death, to express Nanako his gratitude for allowing him to board the elevator, he brought anonymously one flowers bouquet to her parents and elder brother on the memorial service day.

He has a large stature, brown hair and relatively big eyelashes. 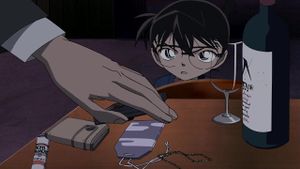