The Detective Conan manga in Italian was first published by Comic Art, from August 1998 to October 2000, with a division of the chapters not corresponding to the Japanese one: the 22 Italian volumes published correspond to more or less the first 15 Japanese volumes (volume 15 was translated only up to its seventh chapter). The publishing stopped after the 22nd due to the bankruptcy of the publishing house. Some Comic Art volumes offered extra content, such as descriptions of famous mystery writers, but usually not the same ones from the Japanese edition. After the bankruptcy of the Comic Art publishing house, the publishing rights of the Detective Conan manga in Italy passed into the hands of Kabuki Publishing, which only released issue 1 in December 2002. After numerous postponements regarding the publication of subsequent issues, in October 2004 surprisingly Star Comics announced that it had acquired the publishing rights, as the contract that linked Shogakukan and Kabuki Publishing had expired, precisely due to the non-publication of the manga. In February 2005, the first issue of Detective Conan by Star Comics came out, and Kabuki Publishing went bankrupt too, without having published any other book. Star Comics is still publishing the manga, with volumes corresponding to the Japanese ones. 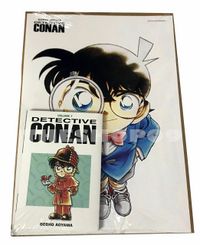 Volume 1 of the La Gazzetta dello Sport series, along with the poster it came with.

On February 21, 2018 La Gazzetta dello Sport, a daily newspaper dedicated to sports, but known also for republishing popular manga such as One Piece, Naruto and Dragon Ball in new collections, immediately after finishing the publication of the previous manga (Dragon Ball ended on February 8 and Detective Conan began on February 21), partnered with Star Comics in a weekly 90 volumes republication of Detective Conan attached to the newspaper accompanied by unpublished insights and new editorial content as in the previous series. The publication started with volume 1 in February 2018 and ended with volume 90 in November 2019. As for the previous manga series, each volume contained a collectible postcard and was about 14x20 cm large. In addition, the first volume had a poster attached. The volumes' number of chapters and orientation of reading didn't change, although the cover was different[1],[2].

In September 2021, Star Comics announced a new series of volumes. The volumes differ from the original run by their new graphic layout, revised texts and volume formats[9].