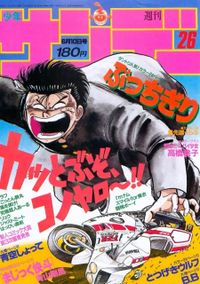 The Japanese version of the Magic Kaito (まじっく快斗 ,Majikku Kaito?) manga was first published in Shogakukan's Weekly Shōnen Sunday's issue #26 of 1987. Serialized until August 1988, it was interrupted by the arrival of Yaiba, and was thus only serialized episodically. The chapters were collected into five volumes, and as of 2021, remains unfinished. 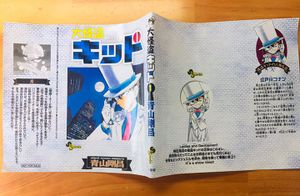 In July 2017, to celebrate the completion of 5 volumes, alternate covers in the style of the Detective Conan covers were released. Titled Great Phantom Thief Kid (大怪盗キッド ,Dai Kaitō Kiddo?), they were offered with every purchase of Magic Kaito volumes[1]. The alternate covers also showed a "keyhole character" and a "featured detective". The numbers are intentionally written out of order to spell out 1-4-1-2 (Kid's alternate name), with the last cover being the Kaitou Kid logo. The "Conan side images" were switched with Kaitou Kid, and the keyholes were Ginzo Nakamori (volume 1), Conan Edogawa (other volume 1), Toichi Kuroba (volume 2), Jirokichi Suzuki (volume 4) and Saguru Hakuba (Kid logo volume).