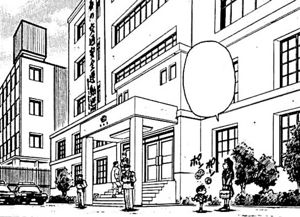 First appearance of Beika Police Station in the manga. 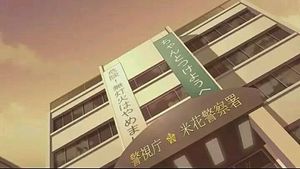 Beika Police Station in the anime.

The Beika Police Station (米花警察署 ,Beika Keisatsusho?) is the headquarter of the local police department of the Beika Ward of Tokyo. It was the permanent working place of inspector Juzo Megure before transfering to the Tokyo Metropolitan Police Department. There is at least one kōban (Police box) associated with the station in Beika, the Police Station 5th Block Beika Town.

Besides Detective Conan, it also appeared in the spin-off Hanzawa the Criminal.

The Beika Police Station is featured as a setting in this game.

Conan Edogawa is on the way back from the Beika Police Department to the Mouri Detective Agency together with Kogoro and Ran Mouri, during which he, with the help of his new glasses gadget, geolocates the tall man "4 kilometers to the northwest... in Shinjuku", which, if you take any point in that ward, would encompass exactly the area tinted and framed in blue on the following map for the police station to potentially be in. This would in real life coincide with an area mainly encompassing the northern half of Minato.