In Magic Kaito, Kaito Kuroba and Aoko Nakamori are not yet a couple, since the manga is not finished yet. But in the last chapter of Yaiba, a scene set after a three years time skip has Keiko Momoi telling Sayaka Mine that Kuroba and Nakamori are a couple now, while Keiko's friend confirms having seen them together. 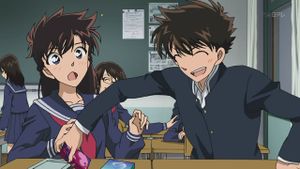 Similar to Shinichi and Ran, Kaito and Aoko are childhood friends who met each other at a young age. Personality-wise, they seem to behave similarly to Heiji and Kazuha: great friends who tend to argue with each other. Despite Kaito's constant teasing of Aoko and Aoko chasing after Kaito for doing perverted things like flipping up her skirt, there are moments in Magic Kaito that show that they care greatly for one another.

Whenever Kaito has to transform into "Kid", he usually tranquillizes Aoko so she doesn't know that he's "Kid", and so that she doesn't get in harm's way during one of his heists if they are together. One of the fan speculations of why Kaito hasn't confessed his feelings for Aoko yet is because he's still "Kid" and he doesn't want to put her in harm's way of the organization that killed his father if they ever caught wind that she's important to him, similar to Shinichi's problem when it comes to Ran. Aoko holds the memory of their first meeting deep in her heart and tries to convey hints to Kaito about her feelings.

Kaito has almost kissed Aoko before in the Magic Kaito Chapter, "The Phantom Lady Part 2" when he escaped a similar situation that had made his mother and father started dating when his mother was still a thief. But since she was sleeping at the time and he thought that it was his fault that she got involved in the situation, he said he would "hold off for now", meaning that he does wish to kiss her but not when he's still "Kid."

Just Another Ordinary Day at School...

Upon coming into the classroom one day, Kaito tricks Aoko by walking on his hands and using a fake head to look at the colour of her underwear. While the fake head is close to Aoko, she blushes. Upon finding out she was tricked, Aoko is so mad she refers to Kaito as "anata" ("you", but can be read as "Dear") while chasing him around the classroom with a mop. Kaito tells her not to call him that since people might think they're husband and wife. Aoko blushes intensely at this. It is implied from the teacher's reactions that these events seem to happen on a regular basis.[1]

First meeting and the reprisal 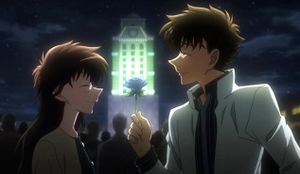 Kaito first met Aoko at a young age in front of a clock tower while Aoko was waiting for her father. Kaito gave Aoko a flower using a magic trick he learned from his own father and asked if she'd play with him while they waited. Aoko holds the memory of this meeting deep in her heart and was quite distressed when she found out Kaitou Kid was going to steal the clock tower. Kid however had an ulterior motive for stealing the tower. By bringing the inscription on the clock tower to everyone's attention, the owner would no longer be able to sell it. Thus, Kid saved the clock tower that was so important to both himself and Aoko. After Kid's heist, Kaito appears to Aoko and performs the same magic trick he did when they first met, much to Aoko's delight. [2]

While Robo-Kaito takes place of the real Kaito who was kidnapped by a mad scientist, the robot explains that he doesn't know why, but when he looks at Aoko he feels strange and suggests it's because he loves her causing her to blush.[3] Robo-Kaito has the memories of the real Kaito, so it's implied that deep down this is how Kaito really feels about Aoko. When Kaito returns at the end of the chapter once the robot is destroyed, Aoko blushes upon seeing him and doesn't say a word. Their classmates, thinking Kaito and Aoko have finally confessed, go so far as to congratulate them and have their names written under an Ai-Ai-Gasa.[4] 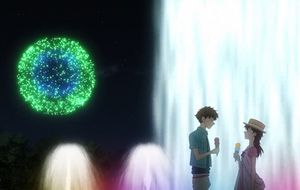 Aoko, in an attempt to prove to her father that there was no way Kaito could be Kaitou Kid, goes on a date with Kaito to Tropical Land. Upon meeting at the amusement park, both blush and Kaito apologizes for making Aoko wait. Aoko says she's surprised he actually showed up and Kaito reminds her he did promise her. Kaito acts coldly towards Aoko at first but Aoko later finds out it was because she wasn't acting like her usual self. Both have a great time once Aoko stops acting like someone she's not. After successfully pulling off a heist without being caught, Kaito and Aoko eat ice cream in front of a fountain. Aoko comments that sometimes Kaito can be as cold as ice cream. Kaito responds by saying that ice cream can be sweet too, causing Aoko to blush. [5]

Aoko asks if Kaito would like something sweet like chocolate. Kaito, not realizing Aoko is hinting at getting him something for Valentine's Day, thinks it's a trick since she laughed at his toothache once. Keiko nudges Aoko asking if she plans on giving a Valentine's chocolate to Kaito causing an embarrassed Aoko to ask "Who'd ever want to give chocolate to him?"[6] Kid's hesitation at eating Akako's chocolate later, despite the fact it'd free him from the pain Akako is giving him, could be because of feelings for Aoko.[7]

Kaito and Aoko skiing as Kaitou Kid and Princess Nakamori

Kaito has almost kissed Aoko before in the Magic Kaito Chapter, "The Phantom Lady Part 2" when he escaped a similar situation that had made his mother and father started dating when his mother was still a thief, but since she was sleeping at the time and he thought that it was his fault that she got involved in the situation he said he "would hold off for now" meaning that he does wish to kiss her but not when he's still "Kid."

Kaito appears riding his bike and offers Aoko to take her wherever she'd like, which can be implied as to go on a date. Aoko blushes after hearing that. Later at a Kaito Kid's heist, Kaito as Kid and Aoko fall into a pit and are trapped together. Aoko fainted and Kid is injured due to the broken glasses shards he fell on when he was protecting Aoko. While he was distracted, Aoko removes Kaito Kid's hat and sees Kaito's face. As Kaito is flustered, Aoko thinks that Kaito Kid wears a mask with Kaito's face. They later enter a room and Aoko finds Kid unconscious. She notices he is injured badly. She speculates that he might have protected her, but she denies the speculation quickly after remembering he's a bad guy. Kid solves the puzzle as Aoko helps him stand. Aoko notices a great resemblance between Kid and Kaito which makes her suspect Kaito.

In the aftermath, Aoko knocks on Kaito's door and shows him a helmet that she recently bought. The two then get on Kaito's bike to go on a date to a zoo. Aoko remembers when Kid's stomach was injured and softly grips Kaito. Kaito tells Aoko to grip tight or he'll lose her along the way. Aoko drops her suspicions that Kaito is Kid and grips him tight happily.