Nanatsu no Ko (七つの子 ?, lit. "Seven children or Child of seven")[1][2], is a popular Japanese children's song written by Ujō Noguchi. The boss of the Black Organization uses this song to encode his phone number.[3]

The name of the song can be validly read in two ways: seven children or child of seven, meaning seven year old child. Although not a literal translation, the song name is occasionally romanized as Seven Baby Crows or The Crow's Seven Chicks.[4]

Ujō Noguchi wrote and published Nanatsu no Ko in Kin no Fune ("The golden ship") magazine on July 1921.[4][2] Nanatsu no Ko is used as the departure melody at Isohara Station in Kitaibaraki. 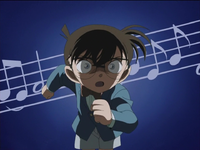 Conan first heard the boss's phone number when Vermouth texted the boss after the showdown with her. He didn't recognize the tune at first although he thought it was familiar sounding and had a sad feeling to it.

Conan noticed that the first few notes sounded very close to the area code for Tottori prefecture. He guessed that it was a song starting with notes "B A G A". He discovered the song Nanatsu no Ko matched the sound of the key presses after asking Kyosuke Haga‎ what songs start with "H A G A" (B is substituted for H in German).

Conan heard Kir dial the boss' number and discovered she was a member of the Black Organization. Later Eisuke Hondou, who knew the number by the tune because his father used to text the boss, heard someone in the hospital where Kir was being held dial it. Ran relayed this information to Conan who learned there was an undercover organization spy among the patients looking for Kir.

Yama no hurusu e
Itte mite goran
Marui me o shita
Iiko da yo
Mother crow, why do you squawk so?
Because high on the mountain
I have seven cute children.