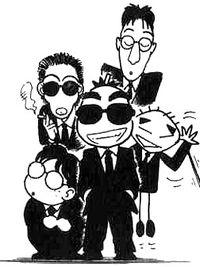 Gosho Aoyama and four of his assistants (Negishi, Tani, Asou and Yamagishi) in a Detective Conan omake.

Gosho Aoyama gets support by a group of mostly 5 to 7[1][2] assistants during the work at his manga, which is a rather unusually high number for the industry. Most of them are friends from his days back at the Ekoda Campus (Fine Arts) of Nihon University, who were part of the same Manga Research Club.[3][4][5][6][7] They also help him coming up with names for the characters[8] and the featured detective in the Detective Picture Book.[9] Several of them grouped together as the Ekoda Detective Group and created the Detective Conan Special manga together with Denjiro Maru, Masaru Ohta and Kazuhiro Kubota.

Eiichi Yamagishi (山岸 栄一 ,Yamagishi Eiichi?) is in charge of designing architecture and technical stuff, like vehicles[10] and weapons[11] and assists Gosho since his first manga.

He has several characters and places designed and/or named after him in their works: He appears as a kitsune-like student at the school in Nonchalant Lupin and got cameos as a member of the "film crew" in the first and last omakes of Magic Kaito. He also has some background cameos. He furthermore shows up as an unwitting customer in Kumo-Otoko's restaurant in Yaiba who gets chased away. There are also several stores named after him in the series. As "Yamagishi-san" he's a member of Shigeo Nagashima's baseball team at Kohnan High School in 3rd Base 4th, as well as a manager of Yoko Okino in Detective Conan and Zero's Tea Time. In the omakes of the second to last series he is "Detective Puppet Yama-chan".

His own works include Cocktail & Bar Course (カクテル&バー講座 ,Kakuteru & Bā Kōza?), a guide to bars and cocktails in the form of a manga, and Secrets of Buddhism (Bukkyō no Himitsu ,仏教のひみつ?), another guide about buddhism, also in manga form.[12][13]

Keiji Asou (麻生 圭司 ,Asou Keiji?) is another assistant active for him since his first work and seemingly helps Gosho with inking the manuscripts and sharing two side-by-side desks with Masaki Negishi.

He lent his name to Dr. Asou in Nonchalant Lupin (which he also appears in as a student independent of that character), the natural sciences teacher Keiji Asou in Magic Kaito (in which he also appeared as a member of the "film crew" working on the series in Volume 5), as one of the "men of Japan" in drag in Yaiba and Keiji and Seiji Asou in Detective Conan. In the omakes of the latter he's the "Homicide Detective" and the "Detective General".

Koichi Kishida (岸田 晃一 ,Kishida Kōichi?) is often shown as a rather huge guy (with the P.E. teacher based on him getting called a "gorilla" by Conan Edogawa) with a contrasting shy and poetic personality, often depicting himself as some kind of parody on Waldo. He's an assistant of Gosho since at least somewhere during the run of Yaiba. For Gosho's website Conatsu he created a short manga about Ayumi Yoshida, Ayumi no Yabō: Zenkoku-ban ("Ayumi's Ambition: Nationwide Edition").

The anime version of the very first murder victim, Kishida, the Teitan High School's P.E. teacher Mr. Kishida (also serving as a model) and several stores seen during Yaiba and Detective Conan are named after him. Furthermore, he's one of the "men of Japan" dressed in drag in Yaiba. He also appears as a member of the "film crew" working on Magic Kaito in Volume 5. In the Detective Conan omakes he's the "Big Head Detective" and "Poet of Life".

Masaki Negishi (根岸 正樹 ,Negishi Masaki?) is an assistant supporting Gosho since his first work and seems to help him with inking the manga manuscripts, sitting next to Keiji Asou. He also has a sub-page on Gosho's website Conatsu, "Chef Negishi no Cooking Book", an online cook recipe book. According to Gosho, he has hayfever, which causes him to associate spring with Negishi's sneezing.[14]

He's got several background cameos in Yaiba and appears as a balloon figure and a member of the "film crew" working on Magic Kaito in the omake of Volume 5. Masaki Negishi and Akio Negishi in Detective Conan were named (and the latter seemingly modeled) after him and in the omakes he's the "Chubby Detective", as well as "The Once Chubby, Now Fat Detective". He can also be seen together with Yutaka Tani in a TV show Kogoro Mouri watches. 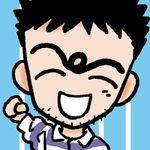 Yutaka Abe (阿部 ゆたか ,Abe Yutaka?), a prolific mangaka himself since the seventies, became known in Japan for original works like FIGHT!, Hai! Step Jun! (which was also adapted as an anime) and 100% Tantei Monogatari (which Gosho assisted him with[15], who was his kōhai during university), as well as commissioned manga like Dragon Quest. Besides assisting Gosho with his works in turn, he also created the manga based on the movies and illustrations for the novels of Detective Conan.

He is one of the "men of Japan" dressed in drag from Yaiba and Yutaka Abe from the "Mysterious Shadow Case" is named after him.

Yutaka Tani (谷 豊 ,Tani Yutaka?) is one of the assistants working with Gosho since his first manga. He sits right across him in the studio and seemingly helps him with layouting/sketching the manuscripts. He also seemingly is the person mainly responsible for maintaining Gosho's website Conatsu and made several artworks and graphics for it, including the character roulette, where he's also got his own private sub-page, "Super Lovely Sonoko!! Fanpage", a fan website about Sonoko Suzuki and her seiyu.

During his cameos he's often depicted as a man with sunglasses and distinct lips, sometimes being drunk. In this function he appears as a dancing drunken man on Aoko Nakamori's christmas party in "Star War" from Volume 3 of Magic Kaito, as well as part of the "film crew" working on the series in the omake of Volume 5. He also appears several times in Yaiba, also being one of the "men of Japan" dressed in drag. In Detective Conan he can be seen together with Masaki Negishi in a TV show Kogoro Mouri watches and in the omakes he's the "Alcoholic Detective".

Gosho Aoyama has a seventh, younger female assistant whose name is not known so far, supporting him since 2011[16], also drawing several of the background and unnamed side characters appearing in the manga chapters since 2016[5]. A young woman appears as part of the "film crew" working on Magic Kaito in the background of the omake from Volume 5 with the other assistants who probably is supposed to be her, carrying away a prop tree.

The men of Japan in drag