Yutaka Takai (高井 豊 ,Takai Yutaka?) is the protagonist from the one-shot Wait For Me and its anime adaption, who also appeared as a fictional person in an Original Video Animation related to Detective Conan. He's a 15 or 16 years[1][2] old teen prodigy (17-18 years old after a time skip) and inventor currently attending a unnamed high school in the Senkawa District[3] of the Toshima Ward in Tokyo.

Main article: Wait For Me

Yutaka Takai is a genius inventor, despite just being in the first year of high school[4]. During a test run he inadvertently creates a time machine while trying a jetpack he built. With this, he plans to travel to the past to be the same age as his girlfriend Mamiko Abe, who's two years older than him. But in a moment of distraction, she grabs the jetpack instead and travels two years into the future to fulfill Yutaka's wish... Can Yutaka remember Mamiko in time to catch her when she returns? 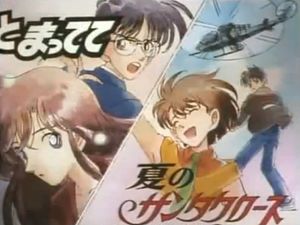 Yutaka on the poster of the double feature in The Wandering Red Butterfly.

Yusaku Kudo and Wandering Red Butterfly go to the cinema to watch the double feature movie Wait For Me/The Santa Claus of Summer, with Yutaka Takai, Mamiko Abe, Keisuke Hara und Asuka Anzai visible on the promo poster. Yutaka and Keisuke can also be seen on the cover of the Gosho Aoyama's Collection of Short Stories volume Yusaku is placing down on the seat next to him.