Dokuro (ドクロ ,Dokuro?), also respectfully known by his underlings as Strong Cat Dokuro (強ネコ・ドクロ ,Tsuyoneko・Dokuro?) or Master Dokuro (ドクロ様 ,Dokuro-sama?) and originally known as Kuro (クロ ,Kuro?) is a street cat roaming around Tokyo, first appearing as a one-off antagonist in Yaiba, terrorizing a bunch of rats living in the Mine residence. He also appeared in Zero's Tea Time twice, attacking Haro and scaring Hiroki.

Dokuro is a cat with black fur who has a cross-shaped scar on his forehead and is missing his left ear. His eyes are completely white most of the time. He's also wearing a dented bell around his neck he once got from his owner, which fittingly resembles a skull.

A young Kuro left behind by his owners.

Dokuro originally was a normal cat called Kuro (literally "Black") with a pretty regular life as a pet in Yaoya, until the family of his mistress, a young girl, moved away, accidentally leaving him behind. He had to survive on the streets of Tokyo all by himself, getting chased by grocery owners when stealing food and by furious dogs, one of whom cut off his left ear. He started to let others pay for what happened to him, building an awe-inspiring reputation and forming his own group of stray cats.[1]

Sometime during winter, Yaiba Kurogane and Sayaka Mine get shrunken and find themselves in the attic of the Mine residence, where a tribe of rats lives, explaining to them the situation about Dokuro and his underlings attacking them regularly. Just after saying this, a henchman of Dokuro barges into the room[2], with Yaiba battling him until he cuts his tail off. He flees back to Dokuro, but gets punished for his failure. Dokuro and the other cats watch this, with the former ordering them to also attack the attic. Yaiba fends off those cats too and proves to the rats that they can defend themselves[3], but during these fights, one of the lit candles in the attic falls to the side and burns the roof, with Dokuro appearing on it between the flames to challenge Yaiba, threatening Sayaka and the remaining rats.[4]

Another battle ensues, this time between Yaiba and Dokuro, where the latter is hit by a firework rocket which causes Yaiba to win by hitting the surprised Dokuro with his Raijin-ken in the scar on his forehead and both getting thrown off the roof, into the well inside the backyard of the Mine residence. Yaiba comes up victorious with Dokuro's corpse, it seems, but the cat is still alive. Briefly before trying to enact revenge, his mistress appears, calling him by his real name Kuro, now being an older student taking him with her, with (Do)Kuro crying that he finally found her again. His underlings escape for good - but now the Mine residence got a rat infestation.[5] 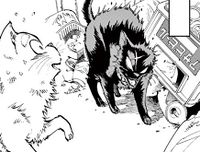 Dokuro hisses at Haro shortly before scratching him.

After Rei Furuya tries to drive Haro away, trying to tell him that he can't keep him, he follows him, running against a pillar in the process and falling down a flight of stairs leading to an alley, where Dokuro - still a stray cat - is standing between the trash, hissing at the young dog and scratching his face open, getting comforted by Rei afterwards.[6]

When the kids are examining an old well, and, after hearing some strange sounds, Dokuro dashes out of a bush, and scares Hiroki with this action.[7]