Difference between revisions of "Heiji Hattori and Kazuha Toyama" 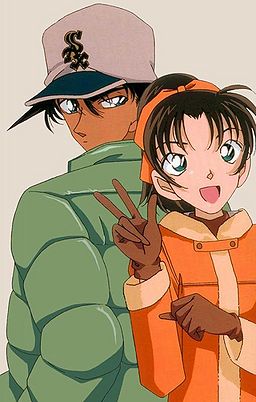 Heiji Hattori and Kazuha Toyama serve as the beta couple for Detective Conan and a foil for Shinichi Kudo and Ran Mouri's relationship. 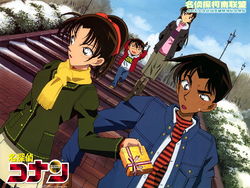 Heiji and Kazuha grew up together and are easily each other's best friend and mutual love interest. They have gone at the same school since they were in pre-school. Neither of them have been shown to have other close friendships outside of their relationships with Shinichi and Ran, though Heiji does have a rivalry with fellow kendo practitioner Okita. They often spend time together, and Kazuha typically comes along when Heiji visits the Mouri's or vice versa, and is usually getting caught up with Heiji in criminal investigations. Kazuha and Heiji both wear twin good-luck charms that Kazuha made with pieces of the handcuff chain that stuck them together temporarily as children.[1] Kazuha and Heiji have both shown jealousy when the other appears interested in someone else, even though they're not officially in a romantic relationship. Although, all their Jr. High School and High School classmates have commented that they're a couple. Their parents have known each other before they were even born. Making their families close.

Kazuha has demonstrated awareness of her love for Heiji, but has been either too shy or unfortunately interrupted any time she tries to tell him. Heiji, in contrast, is played off in the beginning to be oblivious to her romantic interest in him and has gotten confused many times whenever she tries to confess her love to him. This usually frustrates Kazuha and it leads to their "Old Married Couple" arguing that many people point out make them look like a real couple.

Heiji has been shown to be deadly protective of Kazuha and will put himself in harms way whenever she's in danger, such as when he got shot in the arm trying to protect her from being killed in Private Eye in the Distant Sea and when he refused to let her go when she stabbed him with her arrow when they were hanging off a side of a cliff.[2] At the conclusion of that same case, he made a silent promise that he would never let her get hurt while he was around.[2]

Heiji and Kazuha's fathers have worked together on the same police force for many years and are very close friends, it's actually because of their friendship that they even met in the first place. Mr. Toyama has even admitted, albeit teasingly, that he preferred it if his daughter married Heiji instead of some other punk.[3] Both families are very close to each other and because of that, that's how Heiji and Kazuha were handcuffed together in the first place after they were playing a game of cops and robbers.[1]

Even though Heiji has been played off as oblivious to Kazuha's failed advancements on him romantically, it's later revealed that he does feel the same way about her. Such as when he grabbed a guy by the neck and asked, "Whatcha Doin' to MY Kazuha?!" when he thought she was being taken away and kidnapped on Ebisu Bridge.[4] And how he admitted that "Something That Important" (Referencing his love for Kazuha) should be said in a more proper romantic setting than an old bridge. It is during this incident on Ebisu bridge that he finally realised his feelings for Kazuha.[5] 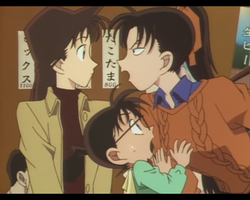 Kazuha accuses Ran of being the Kudo that Heiji is in love with. 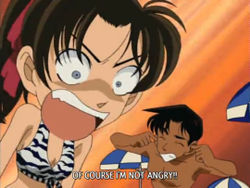 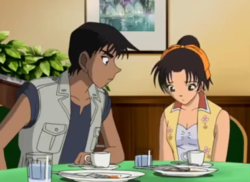 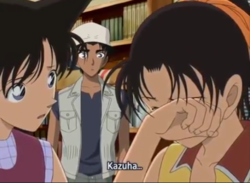 Heiji and Kazuha looking at a photo of the murder victim 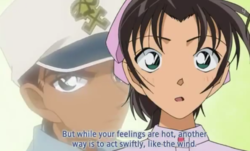 Kazuha realizing Furinkazan can be applied to Love as well

Kazuha about to attempt to confess her love

Heiji denies his love confession on Ebisu Bridge with a blushing face.

Movie 7: Crossroad in the Ancient Capital

Heiji and Kazuha together during class 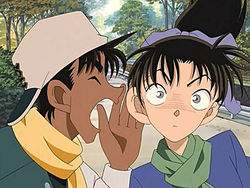 Kazuha and Heiji finally eating Okonomiyaki after a long day of running around.

For the full gallery see: Heiji Hattori and Kazuha Toyama/Gallery