Mysterious Eyes is a debut single by GARNET CROW that was released on March 29, 2000. The titular song is the 7th opening of the anime.

The version of this song used in the TV show is different to the version released in all GARNET CROW CDs featuring this song.

In the opening credits, both the song title and band name were shown in katakana, although they are both normally written in English letters.

This song was the first major debut single released by GARNET CROW, along with a simultaneous release of their indie hit "Kimi no uchi ni tsuku made zutto hashitte yuku". Due to its coverage on TV, Mysterious Eyes gained notably more sales. To this day, "Mysterious Eyes" is one of GARNET CROW's most recognised songs. 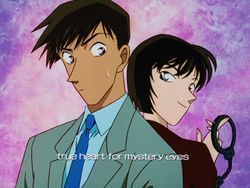 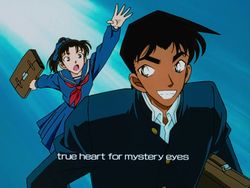 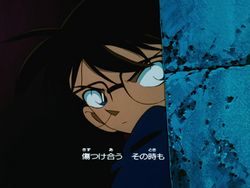 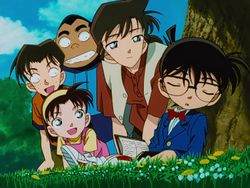 Hisoyaka ni kurikaeshite yuku mayoi no naka
I feel so all in secret life
You and I are different people
What we like, how fast we walk, and how we communicate are all different

In that fading memory of ours
We are searching for someone else, for a future

Only search for the answers
In this time so filled with hesitation
To the next stop, You take your way

In the days of our youth
Those pebbles that overflowed in our hands
Unseen, defying time
Are shining like treasures

Even when we can't see the endless skies
To the next stop, You take your way

Hold me
I'd like to be in your love

Only search for the answers
In this time so filled with hesitation
To the next stop, You take your way

Am Ende wirst du...
Mein Geheimnis sehen.
You are the way you are,
and you live in your own world.

I feel the same way,
Each person must do,
whatever they think is right.

We are never the same,
When we search, we often take different paths to where
The future lives.
And then we find what's important,
And everything makes sense.

And when there are dark days once in a while,
And when you can't see the way ahead anymore,
Then wait, because I am not at all far from you,
We'll take the long way around together.

And what lies ahead of us,
Are only our questions.
What happens tomorrow,
Nobody can know today.
We walk on and you don't let go of me.

Your whisper by my ear tells me the direction.
We inch forward on swaying islands,
But even the longest night comes to an end.

At the end you will...
See my secret.

Busca a resposta que vou ir tras de ti,
o medo conxura que estou ó teu lado,
e non dubides mais, take your way.
Repítemo vai! Feel so all in secret life!
That you and me are different is natural,
in ideas, tastes and style we don't agree, nothing is the same.

But what we have together,
we search the future with so many ambition.
I know that what you want at most,
is the same destiny that I desire every day.

And don't worry if anything will go wrong,
because an special being will be with you.
Mystery eyes and loyal heart,
true heart for mystery eyes.

Loving you darling and doesn't lose you,
and go hand in hand from dusk to down,
and never lie me, please.

Search the answer, I'm going for you,
the fear conspire that I'm at your side,
and don't doubt more, take your way.
let's repeat! Feel so all in secret life!