Gosho Aoyama (青山 剛昌 ,Aoyama Gōshō?) is the alter-ego of eponymous Mangaka Gosho Aoyama who appears in several of his series. He's known to most Detective Conan fans as the eggplant-headed, bespectacled version of Gosho at the beginning of the volumes, introducing his readers to the respective new book while getting killed by different means each and every time.

According to chapter 143 of Yaiba, he is part of the Mine family.

Gosho Aoyama often depicts himself as a rather obnoxious person bent on cheating, who most often instantly gets punished for it - getting electrocuted by Kami-sama in Yaiba and killed by his assistants in the Detective Conan Omake and an unseen force in the forewords of the volumes. When he's not shown to be an incarnation of the Mangaka itself, he is often depicted as some kind of strict movie director, producing his series like they are serial dramas.

Gosho Aoyama is one of the people tied to the large log in the alternate dimension, getting threatened by a giant dragon.

The Santa Claus of Summer

Gosho Aoyama appears on the cover of the one shot in a circle with the text "Gosho Aoyama Presents", looking a bit like a Kaito Kuroba with glasses and a bow-tie and fangs, making a roaring gesture parodying the MGM lion.

The cinema Yusaku Kitakata and the mysterious lady "Wandering Red Butterfly" meet at is called "GoShow Cinema", with a bow-tie like his alter-ego wore a lot back then as an emblem. Additionally, in the Original Video Animation based on the short story, Yusaku Kudo is placing the original 1994 version of Gosho Aoyama's Collection of Short Stories on the place next to him in the cinema, with Gosho's full name clearly visible on it.

Gosho Aoyama appears as a blond-haired movie director called "A-Yama", shooting scenes from the volume, first interrupting Chapter 1 because Kaitou Kid's monocle is on the wrong side. He then tells Aoko Nakamori to hurry for her role as Princess Anne of Sublina in Chapter 2, but she forgets changing out of her school uniform, angering him. Kaito pulls a prank on him by putting a gold fish into the aquarium for the underwater scenes from Chapter 5. He also gets enraged about Akako Koizumi and her refusal to put on the skimpy witch dress, as well as playing her villain part too soft, because the "real" Akako is a good-tempered person. She and Gosho freak out when Aoko instantly gets the villain part right.

Two boys looking like younger versions of Gosho Aoyama's and Eiichi Yamagishi's alter-egos appear on the street, passing by Kaito Kuroba and Aoko Nakamori. A regular Gosho also appears right behind the reporter in Tokyo Dome, making a victory gesture with his hand.

The blonde-haired director version of Gosho, "A-yama", uses a clapper to start every scene of the Omake of Aoko Nakamori's hunt for Magic Kaito Volume 2. His name also appears on the book.

Aoko Nakamori's jacket sports Gosho Aoyama's grinning face with the text "GOSHOW" on the back.

Aoko Nakamori's jacket during her skiing with Kaito Kuroba has a patch of Gosho Aoyama grinning on the front, with just the "GOSHOW" on the back of it.

A sleeping Gosho Aoyama can be seen on the Royal Express to the left behind Aoko Nakamori, after her father found and destroyed Kaitou Kid's bugging device.

Gosho Aoyama returns as the director, now in his eggplant form, finishing the shooting of "Dark Knight". He and everyone else leave to go get eat something and completely forget Kaito Kid still hanging from the wires at the ceiling. 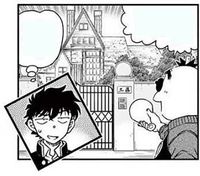 Gosho Aoyama remodeled Akako's house for use as the Kudo residence.

Gosho Aoyama as director finishes the shooting of "Sun Halo" and tells his assistants to get "the gate for the other series" for a remodeling of Akako Koizumi's residence into the Kudo residence. Kaito Kuroba is flabbergasted that Gosho's just recycling settings.

Gosho Aoyama is standing in front of Tokyo Tower, wondering that it starts to snow, shortly before Takeshi Onimaru appears in his airship and destroys the building to prove his power.

Gosho Aoyama and two of his assistants, Eiichi Yamagishi and Yutaka Tani, enter a restaurant with "free food", actually a trap by Kumo-Otoko, disguised as the head cook, for Yaiba Kurogane and his friends. Kumo pulls out a couple of kitchen knives and scares the unwitting trio away before his actual targets arrive.

Two of the persons watching the battle between Yaiba Kurogane and Dorai Dorai in front of "Yamagishi Electronics" are Gosho Aoyama and his assistant Yutaka Tani.

One of the people praying in front of the stone idol on Chikubu Island is Gosho Aoyama, hoping for his favorite baseball team, the Yomiuri Giants, to win next year.

He appears as Ninja "A-Yama", explaining each one of the techniques Kotaro Fuma uses, which annoys Yaiba Kurogane until he kicks A-Yama away, telling him to shut up.

The stadium has a banner naming the "4th Gosho Holiday". Gosho Aoyama and his assistants are also part of the audience inside the stadium during the horse race.

The men of Japan in drag

The "men of Japan" in drag who are part of Gerozaimon Geroda's plan to fool Kaguya are Gosho Aoyama and his assistants.

According to the family tree, Gosho Aoyama is a part of the Mine family, but it's not explained how he relates to Sayaka Mine and the rest. Yaiba Kurogane misreads his name as "Gonosuke Aoyama", with Sayaka reprimanding him that this is rude.

Gosho Aoyama is one of the participants of the eponymous grand prix, much to the chagrin of his own characters. Just like with their vehicles, his number, the "5", is a pun, referring to the "go" in his name, with his char being a large Manga drawing pen on wheels. He tries to cheat close to the end of the race, erasing Sayaka Mine with a giant eraser and redrawing her right behind him to catch up, but Kami-sama, organizer of the grand prix, notices and electrocutes Aoyama, destroying his car in the process, effectively disqualifying him.

Gosho Aoyama appears in his eggplant-headed form at least once during every foreword of each volume, greeting the reader and getting killed by some unseen person outside the picture (jokingly hinted to be Mayuko Kanba in the Hanzawa the Criminal volumes). He also stars in a couple of bonus comics at the end Volume 2, 3 and 4.

At the end, after finishing the chapter, the group walks through Toshima, with Tani mentioning that they have pulled an all-nighter again.

The Yaiba manga volumes of Mitsuhiko with Gosho's name on it.

Conan Edogawa borrowed 24 volumes of manga from Mitsuhiko Tsuburaya, which are revealed to be the complete Yaiba series at the end, with Gosho Aoyama's name clearly visible on them.