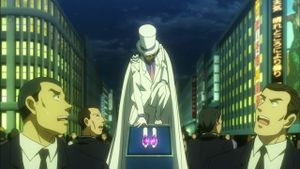 Kaitou Kid appears on an intersection in the 4th Block of Ginza.

Ginza (銀座, "Silver mint"[1]) is a business and entertainment district in the Chūō Ward of Tokyo and appears as a setting several times in the works of Gosho Aoyama, implied to be close to Beika. Most of the time it is alternatively referred to in his stories as Kinza (錦座, "Brocade mint"). In the movies of Detective Conan and other spin-off media, it is sometimes also called Dōza (銅座, "Copper mint").

The most important place of it in the stories almost aways is the (equally real) 4th block of the district with its intersection surrounded by shopping centers, as well as a promenade, which is festively decorated for Christmas time and in real life actually is located in front of the Tokyo Station in the Marunouchi District of Chiyoda Ward.

The police helicopters pass one of the larger intersections in the 4th block of Ginza, with the famous Fujiya Store present, while flying to the Ono Bank to catch Kaito Kid.

Conan Edogawa and Ran Mouri tell about their visit to a cinema in Kinza, mentioning the movie they watched as "The Summer Santa Claus". Conan uses the fact that it stopped playing the previous week as a trap for Ikuya Hatano, who said that he watched this movie there too, so that he contradicts his own alibi.

Kaitou Kid steals the Purple Nail from a closed-off intersection in the 4th block of Kinza. The crossing in question is just block away from the one scene in Chapter 1 of Magic Kaito Volume 1.

The Ginza Line is mentioned by Conan Edogawa.

Ran Mouri and Kazuha Toyama go to see the Christmas lights in the promenade on the 4th block of Kinza, where Kazuha actually wanted to go to with Heiji Hattori.

Yumiko is said to be a hostess in Kinza.