Ran reminisces her idol in the past.

Satoru Maeda is a Jonan University Electronics Department assistant in Tokyo and the Japanese karate champion who is admired by Ran. He's her main inspiration in the world of karate six years ago. He met her as well as Conan and Kogoro during the Night Baron case. He is arrested by the Shizuoka police for interfering with their investigation in a murderer against his fiancée Akiko Sayama and the offenses that came with it, but is likely to get a lighter sentence due to the circumstances of his crimes and his own good behavior beforehand.

He comes of a something of a flirt, showing a noticeable interest in attractive women with their seductive outfit, like Ran and even more Hideko Kamijo. Despite this, he truly loves his fiancée, as he was willing to go to prison, confessing a crime he had not committed, to save Akiko, who loves her above all else.

He has brown skin, big ears, curved nose, and thick eyebrows. His hair are black, something twitchy. During the case, he wears a blue shirt with a brown coat on top.

He is a master-level practitioner of karate. Six years ago, during the same engineering master with his future brother-in-law, he was the national karate champion. Despite his apparent retirement, he is shown to still be a highly capable martial artist, able to calmly deflect and dodge all of Ran's attacks, a feat few, for example Shinichi who is also well-trained in karate but of course not as Conan, are capable of performing. He also knocks out cold with one blow in the head officer Misawa, the strongest 3rd-dan karate master at Shizuoka police station. 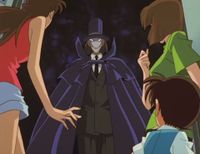 Maeda as the Night Baron.

He and his fiancée are two of the ten participants of the Izu mystery tour, getting to know Ran while protecting her from the hassles of Tokio Ebara. During they stay at the hotel, Ebara is murdered. To relieve the perpetrator, his fiancée, who avenged her older brother's suicide after Ebara hacked his computer software company's work three years ago, he does not tell the police that he owns an alibi for the time of the murder, steals the Night Baron's costume and shows himself to her, Ran, and Conan. Thus, his best childhood friend's sister is relieved. Even as Sleeping Kogoro designates her as the perpetrator, he still tries to cover her and presents himself as the culprit. Although she tries to make it clear during her arrest that he should forget her, he wants to wait for her. He is also arrested for disruption of justice. However, according to Sango Yokomizo, he'll be let off easy for extenuating circumstances.

Eri invites Ran and Conan to dinner along with her friend and client Yuko Arisawa, a judo martial artist. While eating at a hotel restaurant, Yuko tells them she strongly admires Hajime Kajimoto, her former judo senpai and the current coach of Japan's judo team, and watching him on TV is the reason she started judo. Then, since she's the same as her, Ran remembers her admiration for Maeda.