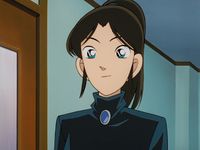 Seiji Asoh is from Tokyo, where he's known as Narumi Asai, a female doctor from Tsukikage Island after graduation who liked to heal children, but commits suicide after having been uncovered as a serial killer.

His father was Keiji Asoh, a famous musician. One night twelve years ago, along with his wife and his younger daughter, Keiji was killed in a fire. Everyone assumed that he had murdered his family and committed suicide. Seiji wasn't killed, because he had been in a hospital in Tokyo. Later, he got adopted by Asai, a friend of his family.

His death left an impression on Conan, who might feel that he is no more different than a murderer for driving him to suicide with his deduction and didn't manage save him.

He murdered Hideo Kawashima, Ken Nishimoto, Tatsuji Kuroiwa, and Isamu Kameyama because they used his father's international concerts as a front for their international drug trade and, when he stated who wouldn't cooperate any longer, they got scared that their secret might be exposed, so they locked the family in their home and set it on fire.

As Sleeping Kogoro explains all of this, he escapes and, while the police is looking for him, the community center building suddenly go up in flames. Having realized that he has been found out, he locks himself inside and set it on fire, intending to die like his father. Conan manages to slip in and tells him, who is sitting at the piano, to keep on living. He refuses, however, because he is already too bloodstained. Then, he grabs Conan and threw him through the window, saving his life. Afterwards, he plays one last music code message in the burning flames: "Thank you, little detective".

Ran wonders why did he summon her father when he knew how risky that would be for his plan, and for Conan it wasn't just a challenge: that deep down, he wanted Kogoro to stop him.