The J League Bodyguard (Jリーグの用心棒 ,J rīgu no yōjinbō?) is the 907th episode of the Detective Conan anime. This episode is a post-story for The Eleventh Striker.

The case first starts in an office where two suspicious men are gambling and watching results on a computer. The first man says, "They are taking it in right from the start", and the other replies with an affirmative. That first man continues by telling "The Japanese will understand what gambling is all about". As they watch results, the game then comes at 8-2. The second man asks if they should proceed with buying, and the first man says that it is being taken care of.

After this scene, the boss of the J League is talking to one of his employee Yasuaki Iwasada telling that Japan performance at the World Cup was disappointing with in background a poster of all-star J-League players written "The Second Half of the J League Starts Now!!".

Show spoilers »
As Kogoro is sleeping mysteriously in his VIP room, Risa Miyamoto enters the room as Kogoro asks him and excuses himself for making her be there. She says that it's fine and that it's her first time in the room. She then asks where are the others to whom Kogoro responds by saying that there are no others that were invited and that she was the only one. He makes a brief flashback of the opening ceremony which was completely flushed down the drain because of his brutal diarrhea. She confirms it and asks if he had recovered from his injury. Sleeping Kogoro replies that he did his best to pass it off as a back pain. He understood that she knew what was coming and she tries to cut him off by adding something but Kogoro continues and adds that he heard her say "Stop him. Please notice". In fact, while she was checking the drinks in the locker room, she deliberately brought him Akagi's drinks which laced with different laxatives. Mouri then asks a question to her: Couldn't she have left it in Akagi's locker or if I hadn't drink it, wouldn't she have brought it back? She confesses that she gambled her life and her fate on him to get money and that she never gambled before but she won her bet. Kogoro asks her if she shouldn't bite the hand that feeds her even if she knew it was the wrong thing. She spills the beans by telling that two years ago, as she was studying abroad in England to become a Roupeiro, she made a friend with another aspiring Roupeiro and they became co-signers for each others' loans. Pursuing her sentence, Conan a.k.a sleeping Kogoro says that the friend disappeared and that she took on their debt. Impressed, she tells he's really amazing and that she didn't know how he looked everything up since they met today. He reveals her that her supposed friend and the Rodriguez pretending to be a good person (in fact the two English gamblers) were part of the same evil totocalcio organization. His real name was Salvador Takahashi Rodriguez. The information Conan collected was via and email he sent to Jodie Starling and the FBI. She bursts into tears and fell to the ground. At the same time, Yuichi Tonozuka enters the room and had heard all the truth. He tries to hide her shame and his for what she had done and deploys multiple excuses by trying to take her blame and asks him to forgive her since he hated to have Roupeiros that cause problems to the league. Just then, Hide scores a goal just at the moment the match ended. He tells Tonozuka to look around and that he'll see people doing foul play everywhere but that here in Japan they had a thorough early warning system and that all these crimes never happened in J League's history. Today's game was a draw and the players were returning.

The next day, Takagi calls Kogoro to asks him if he had diarrhea of something and Kogoro tells he didn't and that it was embarrassing so he hung up. Risa is quickly released without any charges and Takagi tells her Mouri-san doesn't know anything about it and that nothing will happen to her. She walks happily back home. As for the Totocalcio organization, they were all arrested in one day. Haibara gets angry on her computer as she reads the news and asks if some busybody (in occurrence Conan) had put a powerful organization on the job (the FBI). Conan denies any involvement with his disguised laugh. 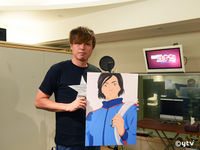 For the full gallery see: The J League Bodyguard/Gallery