Mystery of the Burning Tent

Mystery of the Burning Tent (燃えるテントの怪 ,Moeru tento no kai?) is the 909th and 910th episode of the Detective Conan anime.

Kuroda is sitting at his desk looking at the details of the case from seventeen years ago, thinking deeply about Kohji Haneda and Rumi Wakasa. Shiratori advises him to take a holiday and go camping for a few days. Rumi takes the Detective Boys camping as well. They end up talking with some other campers, who are members of a basketball team. One of them, Danno, had a recent irreversible eye injury and now wears a prosthetic eye, frightening Conan and Haibara who try to figure out if Rumi has a prosthetic eye as well and could be Rum. Urushibara, one of the campers they meet, suddenly starts speaking and acting in a very obnoxious manner to his friends, and shuts himself away in their tent. Soon after, a fire starts in the tent and he gets burned to death. They try to put it out and save Urushibara, to no avail. As they call the police and Inspector Yuminaga turns up, they are surprised to find in a nearby teepee tent another camper, who is revealed to be Kuroda.

When Rumi showed the balancing acorn to the kids (excluding Conan), Ayumi showed it to Conan. This led to Kuroda and Conan to know who the culprit is. 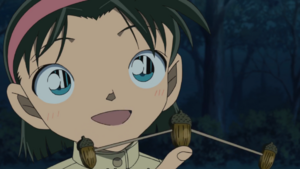 A balancing acorn showed by Ayumi to the kids (excluding Conan)

Show spoilers »
The culprit is Sumito Ashizawa. He made a kind of rocker arm with candles to set fire to the tent later on, Urushibara being asleep and him being away from the tent. He therefore lured the others into believing the candles' movement was actually due to Urushibara doing squats in the tent, implying he was alive and that only Danno could have been the murderer, as he came to the tent after the squats. Ashizawa had put the victim in a sitting position and stuck his hands together behind his head with his own plasters to prevent him from escaping when the burning tent would wake him up. Which means the police will find Ashizawa's hair and fingerprints, along with DNA and skin particles, on the plaster which didn't burn. Not forgetting the cutter he used to escape the tent after locking it from the inside, which has probably some canvas fibers on his blade. Ashizawa says it's indeed the case and uses his cutter to take Ayumi hostage, saying he had asked the victim to damage Danno's eye, to further his own career. But when the 'accident' caused permanent damage, Ashizawa was being blackmailed by the victim, who intended to continue with it. Ashizawa says he'll jump from a cliff with Ayumi, who passes out in fear. As Conan is completely powerless due to leaving his main gadgets in their tent, Rumi comes closer to Ashizawa and orders him to let go of her pupil, and if not to stab her at once, if he desires it so much. She even proposes to help him in doing so, and Ashizawa gets paralysed in fear. Kuroda eventually neutralises him and Ayumi is saved. Conan suspects Rumi even more but Haibara tells him to stop it as she likes her teacher. It is revealed that Rumi is hiding something in her pocket, with the shape of a triangle.

For the full gallery see: Mystery of the Burning Tent/Gallery