Crossovers in the manga with Magic Kaito 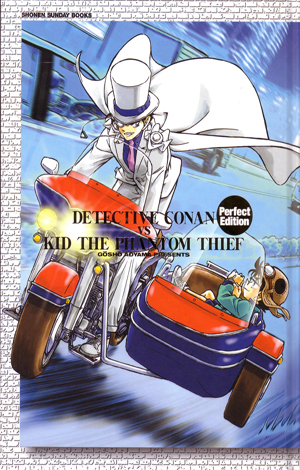 Crossovers with Magic Kaito happening in the manga of Detective Conan.

It's a murderous world after all.

The very first, long before Kaitou Kid himself stepped into the world of Detective Conan, is the inclusion of the amusement park Tropical Land as the setting for Shinichi Kudo's and Ran Mouri's date right from the get-go - just like it was in its role as the background of Kaito Kuroba's and Aoko Nakamori's date in Chapter 4 from Magic Kaito Volume 1. Contrary to Magic Kaito, Tropical Land became a recurring location in Detective Conan and a magnet for all things murderous in nature.

A literary work no criminal author worth their salt should miss from their private library.

When Ran Mouri is cornering the shrunken Shinichi Kudo about his name, one of the books behind him is Magic Kaito Volume 1, clearly identifiable by its name, the volume number and the diamond symbol with Kaito Kid's white tophat above it on the spine of the book.

From Third-Rate to Great Detective (Manga: 6)

Look closely at Professor Hiroshi Agasa's pile of scraps when he's searching for the bow-tie he made for Conan Edogawa - besides some other interesting stuff, there's one of the RZ-04 mini robots who chased Kaitou Kid once in Chapter 9 (Magic Kaito Volume 2, Chapter 3) of his own series, sleeping soundly.

Look like they were made by some really unsuccessful Mangaka.

Conan Edogawa, irritated at still being small and having to visit the children's floor of Beika Library, finds two books, titled "Kaitō Boy" (= Magic Kaito) and "Samurai Shōnin", which is Yaiba. He comments that these books are "boring", so... nice jab at... yourself, Gosho? 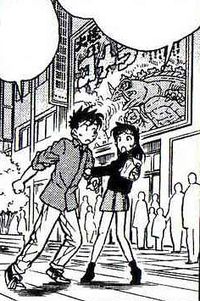 The fictional in-universe character Gomera the Detective Boys are a big fan of and who appears for the first time in Detective Conan here, originally debuted in "Red Star" a year before, in the 22nd chapter from the manga of Magic Kaito, as the movie Kaito Kuroba and Aoko Nakamori go to after meeting Jody Hopper for the first time.

This is going to end well.

And then, finally, Gosho Aoyama's two main characters meet each other in person on the roof of the Haido City Hotel. Furthermore, the ship Kaitou Kid (crossdressing as Ran Mouri) and Conan Edogawa have their showdown on, the "Queen Selizabeth" (or "Sallybeth" in some translations), is not only a play on the real Queen Elizabeth ships, it's also a reference to Queen Selizabeth of Inglam from Chapter 21 of Magic Kaito ("Crystal Mother", Magic Kaito Volume 4, Chapter 1), whose name already was a play on Queen Elizabeth as a person herself.

This case also serves as Aoko Nakamori's only direct appearance in this Manga so far and the debut of her father Ginzo Nakamori, who became a recurring character. It later on got a tie-in story in the form of Chapter 23 and 24 (Magic Kaito Volume 4, Chapter 3-4) of Magic Kaito, with Kid reminiscing about the "Clock Tower Heist" shortly before gliding to the aforementioned Haido City Hotel.

Additionally, Conan Edogawa is depicted in Kaitou Kid's default get-up on the cover of Volume 16 and Kid himself features in that volume's keyhole.

The helicopter is watching you.

Kaitou Kid returns in the guise of a chubby user of a message board for hobby magicians, calling himself Katsuki Doito and investigating the mysterious death of Fuden Harui. His father, Touichi Kuroba, is also mentioned for the first time, being Yoshinori Ara's and of course "Katsuki's" favorite magician. 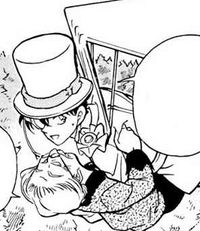 Kidnapping helpless grannies since the turn of the millenium.

An invitation allegedly sent by Kaitou Kid attracts several of the most famous detectives in the world, including his perpetual rival from his own series, the high school detective Saguru Hakuba, who appears for the first time in Detective Conan. The latter also brought along his housekeeper, Baaya, which gets mentioned for the first time and appears in Magic Kaito afterwards. Kid actually was present the whole time, not as the inviter, but disguised as Kogoro Mouri. 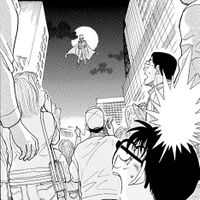 I believe I can fly stand in the air.

The first time Jirokichi Suzuki challenges Kaitou Kid because he "stole" his place in the headlines, with the latter one prompted to take the "Blue Wonder", which he does by seemingly walking through the air. This magic trick mainly works by involving Konosuke Jii, who's got his first appearance in Detective Conan during this case.

Inspector Ginzo Nakamori also mentions to Conan Edogawa that Kid has "at least one" assistant, an "old man or a young woman", referring to Jii with the former and the latter referring to the moment from Chapter 17 of Magic Kaito, where Akako Koizumi disguised as Kid and confused Nakamori and his subordinates when she was screaming like a girl.

"He probably needs it for nefarious purposes, so I couldn't say no."

The Detective Boys ask Professor Hiroshi Agasa to drive them around so that they can look for Ai Haibara's lost phone strap, to which he replies that this is not possible, since he just lent his yellow VW Beetle to a "barkeeper friend" of his, referring to Konosuke Jii. This reference is the third one in a chain that begun in the anime series Magic Kaito 1412, where Jii gave Kaitou Kid some new gadgets made by his "professor friend", who just leaves the Blue Parrot Pool Bar in a yellow VW Beetle, which was taken over by the Magic Kaito manga when Kaito says that Jii's "professor friend" fixed his bike. 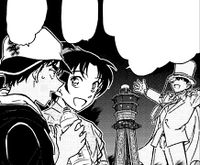 "Have you seen the third movie too?"

It's a challenge by Jirokichi Suzuki again, this time wanting of Kaitou Kid to steal the "Fairy's Lip", which he manages to do by disguising as Kazuha Toyama. The real Kazuha also mentioned the time Kid appeared on the Tsutenkaku Tower before, which she didn't get to see, referring to movie 3, The Last Wizard of the Century, implying that something at least similar happened in the world of the manga, too. 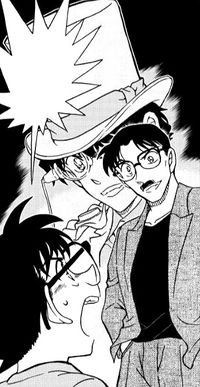 Yusaku Kudo clears Kaitou Kid's name, also revealing to be an old friend of inspector Ginzo Nakamori, and trying to solve another case afterwards on live TV. Unfortunately though, he and his wife seemingly get sick from some bad food they ate at a restaurant, with Kid appearing at the Kudo Residence, disguised as Yusaku, to explain the case in his stead. It's later revealed that this "Kaitou Kid" was in fact Vermouth all along, since the phantom thief was spotted in Shibuya at the time the alleged Kid was present in the Kudo's home.