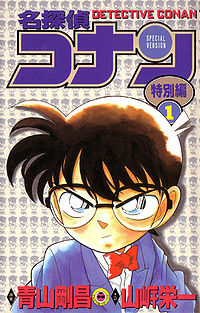 The cover of the first Special volume released in Japan by Shogakukan on January 28, 1997.

During Detective Conan's 20+ year run only two short stories from the special volumes have been adapted into TV episodes: The Kidnapping Location Case and The White Sandy Beach Murder Case. The first episode is significant as it introduces the Electronic Notebook Map gadget, however this device has not been used since this case.