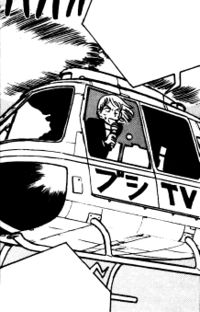 Ana Shioji (シオジ アナ ,Shioji Ana?) seems to be the roving reporter of Bushi TV and often reports about the most spectacular things happening in Tokyo, like Yaiba Kurogane's repeated battles against Takeshi Onimaru and one of Kaitou Kid's heists.

An ecstatic blonde reporter similar to her appears in the manga version of "Midnight Crow", reporting from an open helicopter like Ana often does. It's never confirmed whether it's supposed to be her again, though.

A so far unnamed man who seems to be really into his job, following Ana Shioji everywhere she goes to, no matter how dangerous it may be - even if it is into the stomach of a giant anglerfish, sporting scuba gear.

Hiroshi Kome (米 ヒロシ ,Kome Hiroshi?) is a studio reporter interviewing Kumo-Otoko about the next steps in Takeshi Onimaru's plan.

A blonde man with glasses present at several different heists of Kaitou Kid, often interviewing inspector Ginzo Nakamori. During the TOFU Department Store heist it's confirmed that he works for Bushi TV.

The unnamed blonde reporter with the glasses can be seen on the "Big TV" in Tropical Land, interviewing inspector Ginzo Nakamori about Kaitou Kid's successful heist.

The unnamed blonde reporter with the glasses talks about the alleged kidnapping of Prime Minister Uemoto by Kaitou Kid, before getting interrupted by inspector Ginzo Nakamori, who goes into a filibuster about what happened.

The unnamed blonde reporter with the glasses reports about Kaitou Kid's alleged announcement for the TOFU Department Store heist and interviews inspector Ginzo Nakamori until Kid arrives. This chapter also confirms that he works for Bushi TV, who also have a helicopter present, circling above TOFU.

Ana Shioji and her cameraman appear to report about Kaitou Kid's heist at the Ekoda Museum and his battle with Saguru Hakuba, interviewing inspector Ginzo Nakamori beforehand.