The real Tokyo Skytree seen from across Sumida River. 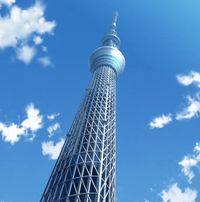 The Tokyo Skytree (東京スカイツリー ,Tōkyō Sukaitsurī?), officially often stylized as TOKYO SKYTREE, is a real tower located in the Oshiage District(jp) of Sumida Ward, part of its namesake city, Tokyo, used for broadcasting purposes and as an observation deck for visitors. It's got a height of 634 m (~2,080 ft), making it the highest building of Japan and the currently second highest artificial structure on Earth.

In some instances, the name of tower was changed to Bell Tree Tower (ベルツリータワー ,Beru Tsurī Tawā?) and made a property of the Suzuki family in the stories, because it was deemed not good to have murder cases happen on or inside the real building.[1] It is still described as the hightest building of Japan, though. Furthermore, in Magic Kaito, it's also mentioned as Tohto Skytree (東都スカイツリー ,Tōto Sukaitsurī?).

The Bell Tree Tower seen from Horikirimizube Park in the manga.

The tower is mentioned by Sonoko Suzuki as "our Bell Tree Tower".

Tokyo Skytree from across Sumida River in the Magic Kaito TV Specials.