To Think We'd Meet at Such a Place...

As the Detective Boys walk on their way to school, Ayumi remembers about the chicken found during the Hatoyama Farm case and is sad that she couldn't keep it. She also remembers that the school's new rabbit wasn't feeling good, and Conan tells her that it probably wasn't used to being there yet and that they'll see how it's "healthy face" once they get there. This comment about a "healthy face" makes Haibara remember that she shouldn't show her face around town and that the organization might be looking for her. Conan then taps her shoulder to calm her, which surprises her, and when he asks her what's going on, she replies with "nothing!". At the rabbit hut, the Detective Boys and their teachers see that the rabbit is doing well, so teachers Kobayashi and Wakasa decide to head back to the staff room, since they had to take care of "visitors". As the Detective Boys wonder why there would be visitors on their animal duty day, a Sunday, Haibara senses a chill, as if someone was watching her. Conan reassures her by saying that no one knows that she is Shiho Miyano, but a man arrives and calls her by her real name, saying that she is Akemi Miyano's sister. Conan interrupts the man by asking who he is, while the Detective Boys ask why he calls her Shiho since she is named Haibara. Before the argument escalates, a man and a woman, as well as teachers Kobayashi and Wakasa arrive and explain themselves. It turns out that the three strangers, Shou Murata, Seiko Ichihashi and Gaku Yanagimachi are in fact former students of the school organising a class reunion and that they had permission from the school to organize it, on the condition that they didn't drink alcohol. Murata explains himself, saying that he thought Haibara looked a lot like Shiho Miyano, the sister of Akemi Miyano, who was also in their class. Conan then asks Haibara why didn't she say it before, but she whispers to him that she didn't know either. Meanwhile, Wakasa looks at them suspiciously, and recognises Haibara as the daughter of Hell's angel, while also remembering Kohji Haneda's corpse. The teachers and the three adults then go back inside the school. Inside class 6 A, two students discuss about what to do and joke about ordering sushi and having teacher Kunigami pay for it. Back outside, the five adults decide to dig up Akemi Miyano's time capsule, which contains all of their memories from 6th grade, without knowing that she died months ago. Haibara secretly tells Conan that her body was on the news, but only reported as an unidentified person. Fortunately, before graduating, it seems that Akemi gave a cipher to teacher Kunigami, which Kobayashi has in hand. 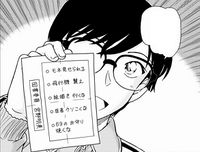 She shows the paper, and the three former students appear stunned by it. They propose to try to find it just by themselves, but the Detective Boys propose to lend a hand to find it. Haibara doesn't seem too convinced about it, as there is still suspicion on Murata, but Conan promises that he will find her sister's voice from thirteen years ago. 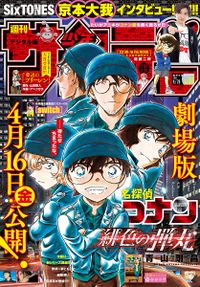