Nazo is a single by musician Miho Komatsu released May 28, 1997. The titular song is the 3rd opening of the anime. It was later covered by the musical group La PomPon for Opening 41 of the series.

Just like the international version of the episodes that use "Mune ga Dokidoki" as the opening, the song starts over from the beginning after Conan's monologue, causing some synching errors and finishing earlier than the Japanese version.

FUNimation adapted their own version of this song for the English release of the show entitled "Mystery". Although the Japanese version appears on their DVDs, the FUNimation version is the longer cut like the international versions. 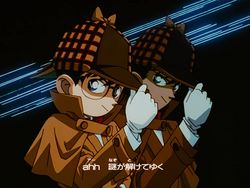 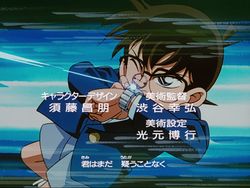 Conan is aiming with tranquilizer 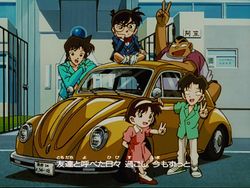 Without a doubt, even now
You live as you did when we were only friends
My tears flow, not stopping
I only wanted you to know what losing something means

My aching heart wants to tell you, even if its just a little
No matter what kind of experiences I have, I still become lost
In this world, your love is something I want to attain
I can't forget the dancing lights that I gazed upon, ahh the mystery solves

When you lose sight of things
You feel as though you have no place, it reflects upon you
It's not on purpose, but it flashes to me
You send mysterious signals to me

Your heart is about to reach me
The ache in my chest wants to meet you now
When I finally have your enigmatic love in my hands
The world will be reborn when it awakens, ahh it will spread to infinity

My aching heart wants to tell you, even it its just a little
No matter what kind of experiences I have, I still become lost
In this world, your love is something I want to attain
I can't forget the dancing lights that I gazed upon,
Ahh the mystery solves, the mystery solves
この世であなたの愛を手に入れるもの
踊るライト見つめて忘れない ahh 謎がとけてゆく

Remember summer days...hanging out...our time together...
Looking back on those even now brings tears that won't cease...You were my true love
Just please have faith in me. I'll bring them back, you'll see.
My wounded heart beats only for you and longs to unveil hidden secrets

Simple wounded heart, it always longs for you...
And longs to tell you secrets
Even now...

You're the strongest with you're children hearth
You always win!

You're the biggest...
Detective Conan...

Vull tornar a enamorar-te, ja no puc oblidar-te...
I want to love you again, now I cannot forget you...
I am, with a glance fixed in the blue sky,
ahh, looking for you in the stars

If you come back with me,
we'll have... happy days
friendship and close days
that will long, all an eternity

I cannot stop crying... I can never avoid it
when tthe memories, of past days,
bring me images of our love

I want to love you again, now I cannot forget you...

Este corazón que bate a cen por ti... está desesperado.
In this world I only have a desire, your sincere love.
Inside me that light alwys will bright, tell me that at the end,
ah, the mistery is solved.

How to imagine... when I feel sad and alone,
that friends are at your side and you here,
don't leave me...

I can't avoid it, and I cannot stop crying
If I'm thinking of you, where you will be?
What holds you, to don't come back...

This heart that beats totally for you... is desperate.