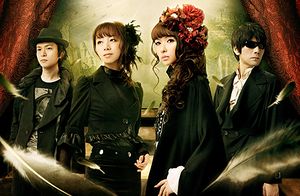 Nana Azuki uses a stage name for her work, but her real name is believed to be Rie Sugatani, which is the name she used in her past career as a model and TV personality. She often writes lyrics for other GIZA artists, and her work for others includes Aoi Aoi Kono Hoshi ni and Free Magic.

Yuri Nakamura is also commissioned to write melodies for other artists, as is Okamoto Hitoshi. They have done work for people such as Mai Kuraki, ZARD and Sayuri Iwata.