Yaiba Appears (YAIBA見参 ,YAIBA Kenzan?) is the very first chapter of the manga of Yaiba. It was written by Gosho Aoyama and drawn by him and his assistants and first released in Shōnen Sunday #39/1988 on August 24th, 1988 and later on reprinted as the first chapter of volume 1 on April 18th, 1989. It depicts the rather involuntary arrival of Yaiba Kurogane, a feral child raised in the jungle, in the Tokyo Metropolis and his initial difficulties in finding his place in a modern society.

Yaiba, Kenjuro and the tiger hide from the gorillas in a wooden crate.

The 14-year-old[1] feral child Yaiba Kurogane, who was raised by his father Kenjuro Kurogane in a jungle and trained in the art of survival and sword fighting hungrily waits for his old man to finish cooking their next meal. He throws off his son's wish by stating that patience is also a type of training. Shortly after this lesson, both of them are attacked by a gorilla. Yaiba felt the approacing animal by meditation, enabling him to defeat it with just one blow of his kendō sword made of bamboo. Yaiba and his father roast the dead gorilla over a bonfire and eat it, which Kenjuro declares is the "law of nature". 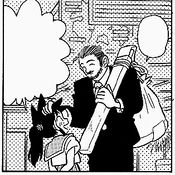 Sayaka meets her father Raizo at the airport.

But the next uninvited guests are already approaching: A tiger noticed the tasty prey of the duo and wants to snatch it for himself, causing father and son to decide to simply eat the tiger, too. It doesn't come to that, though: The relatives of the eaten gorilla have located the killers of their family member and now want to take revenge. Kenjuro and Yaiba flee on the back of the tiger and hide in a wooden box. Just as Yaiba dreams about being awash with food one day, the box is filled with a bunch of pineapples, the lid gets closed whith all three of them still inside the crate and the entire package gets loaded onto an airplane, which is on a direct route to Narita Airport in the Tokyo Metropolitan Area, Japan. 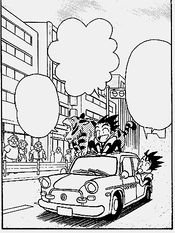 The group flees from the patrol cars in a taxi.

Parallel to their arrival, the middle school student Sayaka Mine wants to meet her father, Raizo Mine, who has just returned from a kendo tournament on the Asian mainland. Sayaka congratulates him for his victory, but the latter just angrily replies that he can never feel like a true winner until he has beaten his old rival - who happens to be Kenjuro Kurogane, incidentally. And as chance would have it, he is just tumbling out of the wooden box at the same airport together with his son and the tiger. An airport police unit sets out to arrest the trio, but Yaiba simply sets the tiger to attack the officers to buy some time and uses the flag of a tourist group as an improvised kendo sword against them. Just as he is about to hit Raizo from behind, Sayaka stands in his way, who asks him about his name. He realizes that Sayaka is something he has never seen before: A girl. To her visible shock, he checks out her entire body and takes a look under her skirt, which she counters by clobbering him with her umbrella.

Meanwhile, Raizo recognizes his old rival in Yaiba's father, but before he can challenge him, he is grabbed by Kenjuro, dragged along into a taxi into which Yaiba, Sayaka and the tiger also follow them. Kenjuro tells the taxi driver to drive all inmates to the Mine residence, while a squadron of patrol cars follows them. Yaiba notices this, climbs up onto the roof of the car and prompts the cops to battle him. Sayaka is just confused who this strange trio may be...

The unnamed jungle Yaiba Kurogane and his father live in seems to be (intentionally) highly ambigious about what jungle or even on which continent it could remotely be. Besides the rather generous surroundings, animals like Gorillas (from Sub-Saharan Africa), Tigers (having their habitat in continental Asia) and Jaguars (who usually live in Central and South America) seem to have their dwell there.