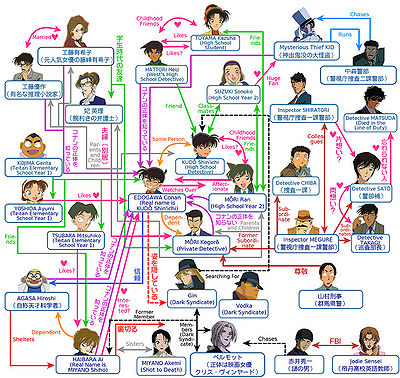 A chart of relationships in Detective Conan, from the promotional website for Movie 10.

Relationships between characters, especially romantic ones, figure heavily into the plot of Detective Conan, more-so than the average shōnen manga. Many of the characters have some connection with a number of the other characters, sometimes in the past. Childhood sweethearts, childhood friends, and childhood connections are particularly common. Romance triangles and personalized conflict between mutual enemies are also frequently used plot devices. Fans often support certain character pairings whether or not there is canon evidence for mutual or one-sided attraction. For a list of existing articles about particular character relationships see Category:Relationships. Relationship info can also be found on individual character pages.