STEP BY STEP is a single by the music group ZIGGY that was released on March 4, 1996. The titular song is the 1st closing of the anime.

FUNimation adapted their own version of this song for the English release of the show entitled "Step by Step". Although the uncut Japanese version appears on their DVDs the song doesn't sync up quite right with the animation. This is most likely because FUNimation did not receive the licensing rights to the specific cut of the song that was used for the original version of the show, so they used the album cut instead. 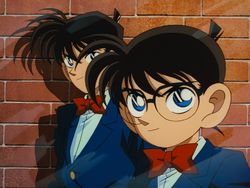 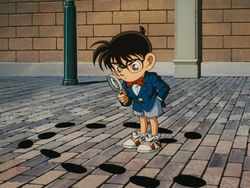 Conan is searching for clues 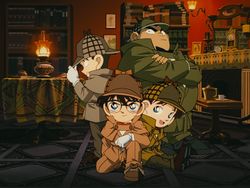 The Detective Boys as Sherlock Holmes 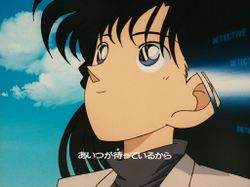 That’s right, Ah- Ah- Ah-
Last week I was in different clothes at the same place

Step by Step
I’m not getting impatient
Case by Case
Even if I get laughed at I don’t mind
Because across the countless days, she’s waiting
I gotta go my own way

That’s right, Ah- Ah- Ah-
Next week you’ll be in different clothes at a different place

That’s right, Ah- Ah- Ah-
Next week I’ll be in different clothes at the same place

That's right (right) (right)
I was in the same place just last week and I ought to know, the only things changed are my clothes

Step by Step
You're in control, don't be uptight
Case by Case
Go ahead and laugh, everything's alright
Beyond the countless days and endless nights I know she patiently waits just for me but...
I gotta go my own way

When I finally find the answer
And I wonder, who help me?
And the plans I had, are rained out!

So long... (long)
I will wait patiently for the right opportunity.
She's coming here soon.
It's a matter of time.

Step by step,
I'll dial your number and call you!
Piece by piece,
we keep getting on, we answer it now!

You will protect me, when the day comes,
Maybe an answer is already waiting?
Who? And who knows how it continues?

Por que hoxe sei que noutro lado ela está,
esperando por min, con mi amor
I see you from fantasy
while the tea in the cup cools.
To a thousand troubles,
we have to put end.

I walk at the Bossa nova rhythm
and I'm going with you very slowly!
For pieces I have,
I just need ingenuity!

Seven days ago I was just a teenager,
but sharp and intelligent alike.

Step by step,
patience is an unique virtue.
Case by case,
I live my life between laughs and dreams.

Because today I know that on the other side she is,
waiting for me, with my love.