When a pretty girl hires Kogoro to help her find an old flame, it seems like a routine case. But when Conan finds out that the man she is looking for was responsible for the death of her fiancé, he realizes that romance is the farthest thing from her mind. What is she planning to do? 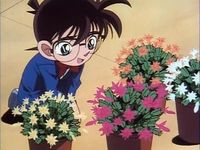 Conan is showing the cactuses to Noriko Okaya.

It's revealed that Noriko Okaya planned to kill Tsuyoshi Kitagawa and his fiancée, to punish them for causing the death of her lover Tastsuo. Dr. Saeki, the late Tatsuo's best friend and Noriko's treating doctor, explains her past to Conan and the Mouris. It is revealed that when they Noriko and Tatsuo had been driving on a mountain highway, Tsuyoshi and his fiancée had been driving erratically on the road and in an attempt to get ahead of them to ignore them Tatsuo accidentally crashed their car.

The rowdy couple just laughed and sneered while driving off without stopping to help or check to see if they were alright or not. Luckily some Good Samaritans came and helped pull Noriko out of the wreckage, however before they could get to Tatsuo their car exploded leaving Noriko to watch in horror as she watched the man she loved die in right in front of her eyes.

While recovering in the hospital Noriko learned that it was very unlikely that the rowdy couple would be convicted or sent to prison. Instead she worked herself to the bone to get back on her feet all to get revenge on the ones that killed her beloved.

Conan, however, appears with Dr. Saeki and brings her beautiful cacti that belonged to Tatsuo, and now are kept safe by Dr. Saeki. They manage to convince Noriko to not kill the Kitagawas and herself.

A remastered version of this case was aired on January 23, 2016.