The Unstated Alibi (言えないアリバイ ,Ienai Aribai?) is the 1041st episode of the Detective Conan anime.

Cona, Haibara, and the Detective Boys are going out, when they see a police officer. An old lady admits that ahe was pushed by a strange young woman from the stairs. However, there is no one who witness the incident.

Conan then realizes that there is a man standing on the alleyway near the scene, and ask him if he saw someone suspicious. However, he admits that he did not see anyone, before leaving the scene. From the man's behavior, Conan thinks that he is suspicious.

Mitsuhiko and Genta then follow the man, while Conan, Ayumi, and Haibara ask people around if they have see the man. Apparently, he was seen at a nearby cafe. The cafe owner says that he is Kanieda, who live in Shikabone, an hour away from Beika by car. The owner knows his name because there was a phone call from someone looking for Kanieda. When the owner ask if there is someone named Kanieda from Shikabone, the man repeatedly says the name and the town. It seems that the man was meeting someone at 1 pm, but the other person could not make it. She then hand over Conan a lighter, which seems belong to that man.

The group later gather at Beika Station, where the man named Kanieda was last seen. Mitsuhiko and Genta have no idea on what the man was doing, as he was attracting too much attention for a suspicous person around Beika. After about an hour, he went to Beika Station and get on the train. Conan then wonders why the man have to recieve call at a cafe while he has a cell phone. Conan also find it odd when the man get on the train that head to the opposite direction from Shikabone. That train stopped one station over at Midoridai, so the group then go to Midoridai and search for the man. Surprisingly, the man is found arrested by Takagi and Chiba, and is brought to Midoridai police station. There, Megure is interogating him.

Takagi then tell Conan and others that the man is Eiichi Usui who lives in Midoridai. Usui is the main suspect for the injury case involving Takeru Hachiya, who was found injured by Sueko Kakimoto at Midoridai Park. Sueko testified that she saw someone got into an argument with Hachiya several days ago, and because she had seen the culprit several times, she thought that the culprit also live in Midoridai. Near the crime scene, a pen with Usui's initial was found.

Usui admits that he have a grudge against Hachiya, but admits that he haven't been to the park. When Megure asks him where is he when Hachiya was attacked, he can't tell Megure. He even try to make a lie but not convicing enough. Conan then says that Usui is innocent, as Usui was at Beika around 1 pm, the time when Hachiya was attacked. Conan also hands over Takagi the lighter that should belong to Usui. However, Usui denied that he had been to Beika, and Usui's fingerprints were not found on the lighter.

The Detective Boys then leave the police station, wondering why Usui did not say that he has an alibi. Conan then decide to check Shikabone telephone book, and found someone named Akira Kanieda. They decide to go to Shikabone and ask Kanieda.

The next day, the Detective Boys go to Shikabone to meet Kanieda. However, Kanieda's neighbor says that Kanieda got hit by a car yesterday afternoon on the other side of the station and is in the hospital, unconscious. They later follow the neighbor to the hospital. Surprisingly, Kanieda looks similar to Usui.

The neighbor then wonder what Kanieda was doing at the south side of the station, when Kanieda thinks it is bad luck. Turns out that about a year ago, Kanieda's mother had some dentures made by a well-known dentist on the south side of the station named Kanzo Saruwatari. Not long after that, his mother was found dead while sleeping after the dentures got caught in her throat. Kanieda, during the funeral, blamed the dentist for making a poorly made dentures which killed his mother.

Conan then get confirmation that the accident also happened around 1 pm. After asking around for more details, he finally solves the case. 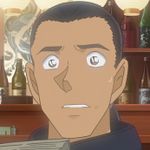 When Kanieda got into the accident he was carrying a paper bag containing a pair of gloves and a rope. Turns out Akira Kanieda planned to kill Dr. Saruwatari to avenge his mother's death. He asked Usui, who is unemployed, to help him making an alibi. Usui then cut his hair as short as Kanieda's, then was sent far away to Beika. Kanieda also asked Usui to went to the cafe and have him receive a call at the cafe. The lighter left by Usui only has Kanieda's fingerprints on it, as the evidence that Kanieda was there at the cafe. After the call, Kanieda then headed out to murder Saruwatari, who was having lunch at his house around 1 pm. However, the plan failed when Kanieda was hit by a car.

Because of that plan, Usui can't testify when he was asked if he saw someone pushed the old lady, as the police will ask for his identity card or driver license. He also can't say that he has an alibi when Hachiya was attacked, believing that it was better than the police discovering him helping a murderer. When he knows the murder plan has failed, Usui realizes that he could have said the truth from the start, before laughing. Megure then screams at him, reminding Usui that he is lucky that he didn't become an accomplice to a murderer.

Later, Kanieda calls Usui, saying that he didn't wanted to have revenge, because he thought that the accident was a divine punishment. Usui then apologizes to the police and is left free just like Kanieda. Meanwhile, the culprit of Hachiya's attack was Sueko Kakimoto, who took advantage of the argument Usui had with the victim.

For the full gallery see: The Unstated Alibi/Gallery