The Great Detective Turned Small (小さくなった名探偵 ,Chiisakunatta Meitantei?) is the second chapter of the manga of Detective Conan. It was written and drawn by Gosho Aoyama and first released in Shōnen Sunday #6/1994 on January 12th, 1994 and later on reprinted as part of Volume 1 on June 18th, 1994. It was also collected together with chapter 1 in the compilation book Detective Conan vs The Black Organization 1 with the subtitle of "VS. Gin and Vodka". 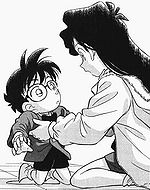 After being discovered by the security guards in his shrunken form and mistaking him for a child, Shinichi Kudo escapes the Tropical Land's medical room to get back to his own home. After a troublesome way back to his house, he meets his family's neighbour and old friend Professor Hiroshi Agasa, whom he quickly convinces about his real identity. Unfortunately, Ran Mouri also arrives shortly after, looking for Shinichi out of concern since he's missing since their date at the amusement park. Agasa and Shinichi invent the persona of Conan Edogawa for his new appearance, moving him in with Ran and her father, Kogoro Mouri, in the Mouri Detective Agency.

After arriving there, Kogoro literally crashes into them, telling about the first case he got in a long time - which catches Conan's interest, since a person clad in black is said to be the culprit...

Main article: Questions given by the Shonen Sunday magazine

Every issue of the Shōnen Sunday features a question asked by the magazine to the manga artists featured in it. The one accompanying this chapter was: