Two mysterious people discuss about the revival of a secret organization named Sphinx.

Conan visits Professor Agasa, who is tasked to build defense robots, at Beika Disaster Prevention Center. However, the security system goes haywire soon after, and Conan is tasked by Agasa to traverse inside the building, defeat the robots, shut the security down, and retrieve the stolen parcel.

Conan, Ran, and Kogoro are invited to Detective Theme Park owned by a man named Haruya Kadoki. They meet up with Heiji and Kazuha who are also invited as well. Together, they must venture and complete all the attractions in the theme park and find the way to the exit.

The Fight In Chinatown Case

The Treasure of the Haunted Hospital Case

The gang splits up with Genta and Mitsuhiko checkings the west wing while Ai checking the east wing. Conan starts searching the lower floors while avoiding the ghost and eventually catches up with Mitsuhiko on the third floor. The two finds out that there's something strange about the ghost: it leaves behind footprints!?

At the same time on the fourth floor, Genta is attacked by the ghost!

As everything about the ghost is getting stranger by minute, the three quickly head to the east wing from the fourth floor to rescue Ayumi before it's too late.

Show spoilers »
The culprit is Yoshira.

Note:Unlocked after collecting all 100 Riddle Cards. 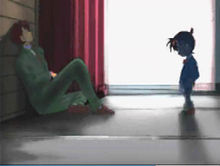 The true identity of mysterious man and woman are Haruya Kadoki and Reiko Kuoshita respectively. Kadoki attempts to shoot Conan with his gun but Reiko stops him and gets shot in the process. However, Reiko succumbs to her wound and died. Kadoki is arrested. 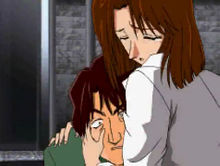 The true identity of mysterious man and woman are Haruya Kadoki and Reiko Kuoshita respectively. After Kadoki is cornered by Heiji and Conan, Reiko convinces Kadoki to let go of his hatred and turn himself in so that they can start over once again.

Note: All answers must be input in hiragana.