After receiving a threatening letter, Risa Tamura, a student on an all-girls high school, asks Ran Mouri to be her bodyguard for one day. She initially talked to Sonoko Suzuki, her former classmate from middle school, about the case, who then convinced Ran to help her.

Kogoro Mouri, Ran and Conan Edogawa then arrive at Risa's school, however Kogoro has to stay outside, since men are not allowed to enter the school building. In her room, Risa shows Conan and Ran the anonymous letter that reads: "On the anniversary of my father's death, I will be taking your life. The spirit of vengeance from the past." Conan deducts that the letter was written with a word processor at this school and asks Risa if she could think of a person who might have sent her the letter. She remembers that her father, who is the director of a loaning company, in one instance had problems with a certain family. It was in fact the family of Risa's best childhood friend Yumi, whose father then committed suicide because of that affair. But Risa hasn't heard anything of Yumi and her family after that, since they moved away. The day of death of Yumi's father will be the following day, so Conan, Ran and Risa begin to investigate the case.

The Treasure on a Solitary Island

Ayumi Yoshida was invited by her uncle who lives in an unspecified harbour city and brings her friends Conan Edogawa, Genta Kojima and Mitsuhiko Tsuburaya along for the trip. The kids get excited over the yacht Ayumi's uncle owns, so he allows them to board it for a little while, but because of the rough sea, he won't set sail with them. At the harbour, a lady dressed in white approaches Ayumi's uncle while the kids are playing on the yacht. She wants to talk with him about something and they go away, leaving the kids alone. Later, Conan wakes up on the beach of a deserted island and remembers that the four of them fell asleep on the yacht. When they woke up later, they were caught in a storm on the ocean, soon went overboard and lost their consciousness. After Conan finds Genta, Mitsuhiko and Ayumi on the same beach, they go on to explore the island. 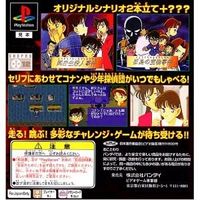