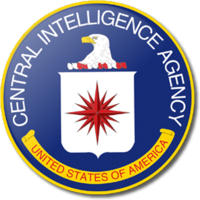 Logo of the CIA.

The Central Intelligence Agency (CIA) is an American intelligence agency which collects information about foreign governments, corporations, and individuals. The only known currently living CIA agent is Hidemi Hondou who has infiltrated the Black Organization.

The Central Intelligence Agency sent Ethan Hondou, to infiltrate the Black Organization. Later his daughter, Hidemi Hondou, who also followed in his footsteps, adopts the alias "Rena Mizunashi" and temporarily joins the Black Organization to introduce an new middleman for Ethan after the previous one was killed. The Organization made her become a television announcer as a cover job. Hidemi Hondou was supposed to then pretend to die in order to leave, but a tracker was planted on her led the Black Organization to Ethan and Hidemi's rendezvous location. Ethan, who had anticipated something like this could happen, prepared in advance a setup that would allow Hidemi to pretend Ethan had interrogated her, but Hidemi had grabbed his gun and killed him. Before committing suicide, Ethan explained to Hidemi what to say to the Org, and he told her not to give up and to complete the CIA mission in his stead. The boss believed Hidemi's story and made her a codenamed agent, Kir. Years after, Eisuke Hondou searches out Rena Mizunashi, still working as a news reporter, in order to uncover how she is connected with the disappearance of his sister Hidemi.

Ethan Hondou and other CIA agents meet at a restaurant in Osaka.

Unnamed middleman for Ethan Hondou who got killed.

It hasn't been stated why or from where the CIA received the directive to infiltrate the Black Organization. The Black Organization in general hasn't shown any indication that they specifically suspect the CIA might be investigating them. Vermouth suspected that Kir was a NOC, but the term is not specific to the CIA.

The Japanese law enforcement not appear to know about the CIA's mission. Meanwhile, Kir has been willing to murder and commit other illegal acts in order to gain the Black Organization's trust, crimes which merit severe punishment under Japanese law.