Ony, often written in capitals as ONY, is a recurring placeholder brand for Sony in most of Gosho Aoyama's works. Usually Ony is the standard brand for televisions and cell phones in Aoyama's series.

The name originally comes from Yaiba and was a play on words with Sony and "Oni", since the products were created under the possessed Takeshi Onimaru's reign over Japan, during which he and his minions created some "demonized" versions of real companies and brands. First appearances of ONY products in different Manga often appear in conjunction with other Yaiba allusions.

As far as can be gathered from the works of Gosho Aoyama, ONY produces:

First appearance in Magic Kaito. The television set in inspector Ginzo Nakamori's bureau, which also contains Yaiba Volume 1, is from ONY, both a reference to Yaiba at the time.

Kaitou Kid's pocket TV also is an ONY. This was, together with Ana Shioji and her cameraman as guests in the same chapter, again an allusion to the Manga series Yaiba, which was still very successful in the Shōnen Sunday at that time.

Aoko Nakamori's smartphone is an ONY, the time this brand appeared in the Manga after more than 14 years of real time. She shows Kaito Kuroba the online news "Kaitou Kid defeated!" on it.

The ONY smartphone of Aoko Nakamori is seen again, with her checking whether they can get any signal at all in their trap.

The television hanging from the ceiling on chains in Takeshi Onimaru's hall, on which he and Kumo-Otoko monitor Yaiba Kurogane's progress, is an ONY again. 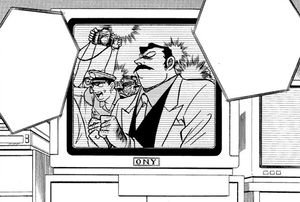 Dino Cavane on an ONY television in Detective Conan.

The television in the display window showing the arrest of Dino Cavane is an ONY, the first one in Detective Conan. This case also was the debut of Kamen Yaiba as an in-universe franchise.

The television in the hotel room at the beginning of the case is an ONY model and the disposable camera used by the culprit is a "ONY Onicolor Flash" (differing in spelling between "Onycolor" and "Onicolor"). Furthermore, Satoru Imatake's novel is called "Kenyuu Densetsu", an allusion to Kenyuu Densetsu Yaiba.

The game console - a riff on the Playstation - is made by ONY. Noriya Makabe plays a game on it in which the Haō-ken is obtainable and on the television the console is connected to, he watches Kamen Yaiba, who fights against Takeshi Onimaru's minions, the horned Oni.

The television in the house of Maria Higashio's is an ONY, which is standing right next to two puppets of Gerozaimon Geroda and Namako-Otoko.

After a slew of Yaiba allusions in Yuya Kazami's mobile game, Azusa Enomoto's smartphone is revealed to be an ONY.