Battle of the Haunted Warehouse's Treasure

The Detective Boys hear a rumor from a classmate where a warehouse one second, was filled with treasure and how they all disappeared the next. Before heading to the warehouse to investigate, the Detective Boys drop by Conan's house where they run into an unknown person unbeknownst to Conan. During the warehouse investigation, Conan notices that there were recently made footprints from an adult even though the warehouse has been locked up for years and that the footprints lead up to an abacus with an odd number of beads. Conan decides to look through the warehouse by climbing a tree and looking through a window and sees the treasure their classmate was talking about. When they enter the warehouse through the front door, the Detective Boys discover the warehouse is in the same state as when they entered it. While Conan deduces that there might be a mechanism in the roof or in the floor, the Detective Boys prove him wrong declaring that the distance between the window and the roof is two meters from the outside and inside and that the markers they placed on the floors did not change. The marker leaning against the wall however has disappeared causing Conan to wonder what the mechanism in the warehouse is. 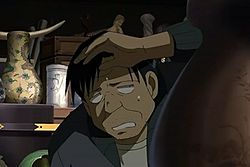 Conan and Inspector Momose found the culprit of recent jewlery and antique robberies. He was the gardener hired by the warehouse owner.

When the police arrive, the Detective Boys explain that the warehouse has a low ceiling which was concealed by the interior design of the warehouse. A fake window was installed inside the warehouse to mimic the distance between the window and the ceiling outside the warehouse. Conan then explains the abacus reveals the secret room in the attic when it is arranged so it represents the Kanji Samizu. The ceiling lowers revealing a room full of stolen goods and the robber who is arrested by the police. Conan reveals to the Detective Boys that he discovered Heiji has been giving them advice during the investigation and forces Heiji to come out of hiding.

For the full gallery see: Battle of the Haunted Warehouse's Treasure/Gallery