The Cost of Likes

The Cost of Likes (いいね。の代償 ,Īne. no Daishō?) is the 944th and 945th episode of the Detective Conan anime.

Conan, Ayumi, Mitsuhiko, and Haibara visit the injured Genta at the hospital. Fortunately, his injury is only minor because he was saved by a man named Sumito Kagura, who had broken his right arm. Several other accident victims are also hospitalized at the same place as the two of them, including a man named Kikuhide Otsubo. Shortly after, Kagura is visited by his two friends, Haruka Ibe and Go Kouchiyama, the latter also takes a his picture to post on his social media which earns a lot of Like, as Kagura himself was injured in an accident and had received a huge amount of collateral money enough to pay all his debt. As the Detective Boys continues to listen to the trio's conversation, Conan notices that Otsubo starts to act suspicious toward them.

After Genta is discharged from the hospital, the Detective Boys begin their search for the truth behind the incident as they've become suspicious of Kagura's so called unlucky fortune. Ayumi and Haibara follow Kagura's action the entire day, but unable to find Kagura being anything more than a simple lucky-going guy. Genta and Mitsuhiko check out the cafe that Kagura's co-worker and boss hang out and discovers that Kagura did have sufficient motive to cause this incident due to his co-workers telling that he was hoping for "more tasty collateral damage". Meanwhile, Conan uses the Otsubo's address he got from the nurse to locate his apartment and obtains his information from Otsuhu's neighbor Shiro Yasukawa as he is unable to find Otsubo himself, and discovers that Otsubo is a web influencer who is fixed on obtaining info related to the unlucky Kagura. Because of the conflicting information, the group is unable to prove that Kagura is the mastermind behind the incident, and decides to postpone the investigation until tomorrow, which they will interrogate Otsubo as they have suspected him of witnessing the culprit being the fake bomb threat.

However, that night, Otsubo is murdered in a park after threatening to expose the culprit's crime.

With the murder happening, the Detective Boys especially Genta become convinced that Kagura must had silenced Otsubo. Genta then rushes off to Kagura's apartment in order to get him to spill the truth. 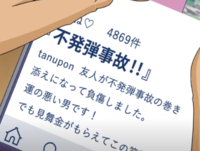 For the full gallery see: The Cost of Likes/Gallery