While discussing Conan's journey to London and the case he had to solve there, Conan and Haibara once again discuss Conan's reckless behavior in ingesting the anti-APTX 4869 meant for his return journey in order to reveal himself to Ran. An accidental comment makes the other Detective Boys suggest that they play hide and seek inside an abandoned building Genta knows.

As they begin playing (with Conan once again prevailing with his detective skills), Genta hears a strange knocking that Conan deduces is emergency code 252 - a plea for rescue. While searching through the building, they encounter two men, apparently demolition workers, who claim that they made the knocking sound with hammers. But noticing three consumed sushi bento boxes nearby and catching them with a trick question about how the house is to be torn down, Conan deduces they are fakes and have are really holding someone hostage in the building somewhere.

Ayumi talking about her cellphone.

In between, the Detective Boys reveal each other's cell phone screen motives: Conan's is a picture showing him and the drunken Kogoro; Ayumi playing with fireworks; Mitsuhiko's motive is Kamen Yaiba, Haibara's the sleeping Professor Agasa, and Genta's a stray cat.

Unfortunately, the two culprits have overheard the children's conversation and plan to put them out of the action. Conan manages to trick them and sends his friends running downstairs while he prepares to call the police; but then he trips, losing his cell phone and alerting one of his pursuers. Conan prepares to knock the culprit senseless with his power shoes and ball dispenser, but suddenly the second culprit opens a door between them; the soccer ball bounces off the door right back at Conan, knocking him unconscious.

When the others arrive downstairs, they find the shutters on the entry door closed by the culprits, leaving them trapped inside. Haibara offers herself as a bait, distracting the culprits so that Ayumi, Mitsuhiko and Genta can escape and alert the police. But just as they are about to make the call, the culprits use Haibara and Conan as leverage to force them to abandon that idea, leaving the children stuck between a rock and a hard place.

With them being secure from the police, the culprits decide to find the remaining children and silence them once and for all to ensure the smoothness of their plan: to have the daughter of their original victim bring the ransom, lock her into the building, and eliminating all witnesses by setting it on fire. While one scours the empty building, the other remains behind in one of the rooms on the fourth floor, with Conan and Haibara kept tied up in the open and their other victim sealed away in a locker. But what the two don't know is that Ayumi, Mitsuhiko, and Genta have actually managed to slip into the very same room and hidden themselves in one of the lockers, now able to overhear the two culprits safely but unable to reveal themselves in order to rescue their friends!

However, Conan has managed to grab hold of his Detective Boys Badge and, taking a leaf from the kidnap victim, he begins to tap messages based on the Tokyo Fire Department emergency codes to his hidden friends. Deciphering the messages with the help of Mitsuhiko's note book, they gradually begin to understand that Conan wants them to call their individual cell phones, which have ended up scattered all around the building, matching the codes he transmits with the cell phone wallpapers in order to play through a chaotic sequence and thereby to draw the kidnappers out of the room.

The plan eventually works: Frazzled with their continuous lack of success in apprehending the kids and contacting their kidnapper's daughter, the second culprit temporarily leaves the room in order to help in the search. The culprits eventually come behind the ruse, but by the time they react, it is already too late: Conan knocks their guard out with his tranquilizer watch and prepares to ambush his accomplice, unaware that the latter has in the meantime encountered someone on the stairs. And now ominous footsteps are approaching...

Show spoilers »
The new arrival turns out to be not the remaining culprit, but Subaru Okiya. Okiya declares that he had noticed that no one had turned up at Professor Agasas' house, and after he had caught two attempts to call up the occupants, he had borrowed one of the spare Criminal Tracking Glasses to home in on the children's badges and found his way to the house. The other culprit, he claims, must have slipped on the stairs and knocked himself out.

The kidnap victim of course turns out to be Agasa himself, knocked out, bound and gagged inside the sealed locker, and the girl whom the kidnappers had mistaken for his middle-school student daughter has really been Ai, due to her rather adult-like way of talking on the phone (they never saw her personally). The next day, the Professor confesses over a serving of curry rice for everyone that he did tap the fateful message the children had caught after hearing their voices, but did not know of any emergency codes. He had actually meant to convey "Sugu keisatsu-ni yobe!" ("Call the police right away"), with the words as syllables - only just - coincidentally matching the knocking sequence 252.

Clues as to how Conan discovered the culprits to be impostors: 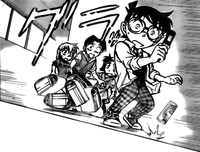 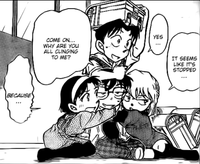 The aftermath of the earthquake.