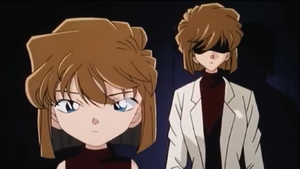 Over the course of the series, nine characters are confirmed to know that Ai Haibara is actually Shiho Miyano or Sherry. In their respective categories, characters are listed by the order they came to discover, or become suspicious of, Haibara's identity.

Ai Haibara revealed her true identity to Hiroshi Agasa at some point after he started adopting her.

Ai Haibara told Conan Edogawa that she was a member from the Black Organization with the code name "Sherry", and also the creator of the drug that shrunk both of them. At first Conan didn't believe her words, but he was forced to take it seriously when she told him that she knew he was Shinichi Kudo, and that Hiroshi Agasa had been killed.[1] After finding out that Haibara was just joking about Agasa's death, he became much calmer and thought that she was just trying to scare him, but only to get a casual confirmation from Agasa about her identity.

Pisco found out that Ai Haibara was Shiho Miyano because he remembered her appearance when she was young. He later compared it with the data in the Black Organization's database to confirm about her identity, and kidnapped her.[2] However, he was killed by Gin before he could reveal her whereabouts.

Conan revealed her identity to his parents, Yukiko Kudo and Yusaku Kudo.

Shuichi Akai figured out that Ai Haibara is Shiho Miyano sometime after he first noted her appearance in Contact with the Black Organization. In Secret of the Tohto Film Development Studio, Akai asks some FBI agents to surreptitiously photograph her. Akai then carries her photograph around in his truck in The Four Porsches case. He thinks aloud that her appearance is "too similar". It is confirmed that Akai had discovered Ai's true identity by the Showdown with Vermouth. Akai remarks that he is not willing to confront Haibara yet. Since the fake child identity "Ai Haibara" came into existence only very recently and had no direct interaction with Akai, he must have reasons related to his past with Shiho for him to feel unwilling to speak with her. It is uncertain whether he has told other FBI agents about this information.

Vermouth figured out that Ai Haibara is Shiho Miyano; however, she has never revealed this to any other member in the Black Organization, except maybe Calvados whom she called out to help her kill Jodie. The time when Vermouth finds out Haibara is Shiho is unclear as the office scenes with Sherry's photograph chronologically occur much earlier than the cases they are shown in.[3] Vermouth must have discovered Ai's identity between Reunion with the Black Organization and Mistaken Detectives, when she took over Araide's identity to join Teitan Elementary to get close to Haibara and switched Araide from the basketball club to the drama club.

It's entirely possible that Vermouth discovered Ai's identity in the middle of Reunion with the Black Organization, possibly from Pisco who was on the mission at Haido City Hotel at time. After that case, Vermouth says she wants to stay in Japan for a while because she had "something unsettling in her mind". If this is the case, the office scenes must have been a parallel construction charade to draw out the FBI agents she knew had followed her and bugged her office. She also lied during the showdown when she claimed that she had acted those scenes out because she wanted the FBI to find the girl for her. She already knew where Shiho was, but had to hide from the FBI the fact that she could instantly identify people who have been shrunken because she is aware that de-aging is possible.

Calvados witnessed Vermouth calling her "Sherry".[4] He was severely injured by Shuichi Akai and committed suicide with his handgun before he could tell anyone else about this.

After Rumi Wakasa overhears the conversation between Conan and Haibara, she realizes that Haibara is Shiho Miyano.

As Curaçao is trying to flee from the Black Organization, she encounters Ai Haibara who has come to rescue the Detective Boys. She saves Haibara as the latter is about to fall to her death and quickly figures out that she's in fact Sherry, the scientist who betrayed the organization, likely due to the fact that her unique memory stored information regarding the organization's secret projects including those that Sherry had been working on. However, instead of killing Haibara or bringing her back to the men in black, she asks Haibara to escape with her. When she becomes aware that the Detective Boys was trapped in the ferris wheel, she draw herself a target of gunfire, allowing Haibara to rescue the Detective Boys. She later crashed the crane truck to the rolling ferris wheel, helping Conan to stop it, but also causing it to crush to her death.

Jodie Starling calls her "Sherry" at times but it is uncertain whether she actually knows about her de-aged state, or that she was once a member from the Black Organization.

James Black calls her "Sherry" at times but it is uncertain whether he actually knows about her de-aged state, or that she was once a member from the Black Organization.

Masumi Sera shows a mysterious interest in Ai Haibara. She somehow found out about Haibara's reflection on an online video that cannot be easily discovered. She later deleted an image from this video, commenting: "Deletion. For data at least... is an easy task to accomplish."[5] She once asked Ran and Sonoko some information about Haibara[6], and also seemed to recognize Shiho Miyano from the video that Mitsuhiko filmed.[7] However, how much she knows about Haibara is still unknown, and it's still uncertain whether she has actually figured out about her identity.

After Shinichi's Kyoto trip, Masumi is aware that there is a method turning Conan to the original body, she knows that Haibara is mature child which is similar to Conan. She starts to investigate Haibara in order to reveal her true identity and give her the antidote. However, she hasn't discovered that Sherry is the creator of such antidote due to Subaru's interruption.

During the Hatoyama Farm case, When Conan tells Mitsuhiko to not to worry as Haibara is 'pretty sharp', Amuro replies " that girl Haibara Ai... it feels like I have met her somewhere before; She seems like a shy one, always obscuring her eyes... with her hat". Conan mention that he met her during the Sweet and Cold Delivery Service. But it is uncertain whether he actually suspects about her de-aged state or not. In the Higo strap case, he saw Mitsuhiko's video on his phone, and practically in front of the camera was an exceptional view of Haibara, in contrast to the Delivery Truck case, where she hid her appearance from him, or the Cherry Blossom case, when she was just one of the 4 other kids that Conan hangs out with, however Rei did NOT give any sign at all of recognizing her as Sherry at all, considering she is a child at the time. However, he is a great investigator, and may simply have hid any sign of recognition, in order to protect her, since the organization thinks that Sherry is DEAD.