Taiko Meijin's Match of Love (太閤恋する名人戦 ,Taikō Koisuru Meijin-sen?) is the 785th and 786th episode of the Detective Conan anime.

Shukichi Haneda is at Tokiwa Hot Springs, preparing for his shogi match for the title of Meijin. As he was talking to two women, a picture of Yumi Miyamoto fell out of his robe. When he picked up the photo, he thought back to two days ago, when Yumi told him she already threw away the envelope he asked her to not open until he obtains all seven because he never called her ever since he gave it to her. After that small conversation, she stormed out of the cafe, where they were talking; when he came out, she was nowhere to be seen. As he tries to find her, a stranger watches him in a car, carrying an evil smile.

Meanwhile, Professor Agasa, Conan, Haibara, and the Detective Boys are visiting power spots via Agasa's car. On the way, Masumi Sera calls Conan and tells him she moved to Hotel Hyde Pride, which is close to Mouri Detective Agency. The unknown child who lives with her is also living in her new hotel room.

As Shukichi heads his way toward today's game, one of the women he talked to earlier gave him a letter a strange man delivered yesterday morning. It was written by Yumi, but when he opened it....

In the middle of his match against Chikara Katsumata, Shukichi left abruptly and took a car ride to Tokyo. It turns out the letter stated that Yumi was kidnapped, and to save her, he must decipher the kidnapper, the Headless Shogi Player's, game record within a limited amount of time. It also told him to not to tell anyone, not even the police. The game record says: "First game. One of the seven shrines is attacked by thieves. The sanctuary is emptied on the second day. The priest's daughter hiding in the well is kidnapped as well." He has less than six hours to crack the code and save her.

After arriving in Tokyo, Shukichi coincidentally meets up with Conan and the others. After Conan smartly separates him from everyone else, he secretly tells them, upon Conan's request, why he came here. With 3 hours and 58 minutes remaining, Conan, Shukichi, Professor Agasa, Haibara, and the Detective Boys set off to solve the game records and save Yumi from the kidnapper.

The word "seven" in the game record refers to the seven major shogi titles: Meijin, Ryu-oh, Kioh, Osho, Oza, Kisei, and Oi. Originally, the purpose of shogi is not to capture the opponent's king, but to steal his treasure. The "emptied sanctuary" means the king or treasure disappeared; the only shogi titles that do not contain the character for king (pronounced o in Japanese in this case) is Meijin and Kisei. "Emptied on the second day" refers to a shogi match that must be played for two days; among those two titles, only the Meijin match is played for two days, while the Kisei match is played for one day. Thus, the "shrine" must refer to a shrine that has "Meijin" in its name; that would be Meiji Jingu, where Conan, Shukichi, and the others are right now. The "well" represents Kiyomasa's Well, a power spot Conan and the others visited before Shukichi joined them.

They head to the well to find clues that will lead them to Yumi and the kidnapper, but they are stuck behind a huge line. To kill time, Shukichi tells everyone how he first met Yumi ten years ago, when he just finished his ranking match and was riding the Tohto Loop Line. He was exhausted after that match, and he ended up accidentally sleeping on Yumi's shoulder while drooling all over her clothes. She woke him up just in time to get him off the train, as it already arrived as his destination. As they part off, Shukichi notices Yumi heading toward a counterclockwise-running train, even though they previously were riding in a clockwise-running one. He realizes that she was waiting for him to wake up, even though she already passed her stop, because she thought he looked cute while sleeping.

After he finished the story, they finally are at the well. Conan looks into the water and finds an incense chariot piece buried in the rocks. This is the next clue to the kidnapper since "second game" is written at a side of the piece. There is something drawn behind the piece....

Meanwhile, the culprit is in his room, forming some game strategy, which is related to some event ten years ago, against Shukichi. Yumi is lying on the couch, asleep and all tied up.

The drawing behind the piece consists of two overlapping, different-sized circles; the big circle has "seven" written in it, while the small one contains "three". There is also an upside-down T, with its vertical line drawn through the overlapped region. As everyone tries to understand the meaning of the drawing, Conan receives a call from Detective Sato, who asks him if he knows where Yumi is. He makes up a lie, tells her Yumi wandered around somewhere for two days, and orders her to get a patrol car ready. Naeko Miike, who was listening to the phone call with Sato, heads off to get a police car.

As everyone talks about the incense chariot, Conan and Shukichi suddenly deciphered the meaning of the second code. With three hours and four minutes remaining, they head off to, as Conan puts it, a place in the middle of a slope with a terrifying name.

Conan, Shukichi, Professor Agasa, Haibara, and the Detective Boys arrive at Yureizaka and are heading towards a graveyard in the middle of that slope. The "seven" and "three" on the incense chariot piece refer to Kiyomasa's Seven Spears and the Three Great Spears of Japan. The overlapping region between the two spears represents Masanori Fukushima, a person of the Seven Spears who owns Hinomotogo, one of the Three Great Spears. The upside-down T is the cartographic symbol for graveyards.

When asked by Professor Agasa who the kidnapper may be, Shukichi thinks back to a shogi match he played against the very same culprit. That incident was the culprit's motive for kidnapping Yumi.

Conan and the others arrive at Fukushima's grave to search for more clues to the kidnapper. Genta and Mitsuhiko peek behind the grave to see a shogi board hidden there.

Meanwhile, Masumi Sera finishes her shower and sees the unknown child sleeping. She notices the remote on the bed and turns on the TV, which displayed Shukichi's shogi match.

On the board Genta found, there are shogi pieces stuck on it. A rook is stacked on top of the bishop, and a nail pierces through those two pieces. There is also a gold general stacked over a silver general. The board has two bishops but one for every other piece. On a side of the bishop piece that us under the rook, the word "show-off" is etched in. "Lazy" is written on a side of the gold general piece. At this point, there are two and a half hours remaining, but Shukichi is not going back to the shogi match until he saves Yumi from the kidnapper. After some time, Conan and Shukichi figure out the meaning of the shogi board and deduce Yumi is held captive in Haido City.

The shogi pieces refer to the Seven Deadly Sins, which originally were the eight sins of gluttony, lust, greed, sorrow, wrath, sloth, vanity, and pride. Later, vanity merged with pride, sorrow merged with sloth, and envy was added, forming the modern seven sins. The bishop with "show-off" written on it represents vanity, the other bishop represents envy, the gold general labeled "lazy" represents sloth, and the rook represents pride. The nail indicates where Yumi is at, and since it is pierced through the rook, the name of that place must contain the word "pride"; the only place nearby would be Hotel Hyde Pride.

Conan and the group arrive at that hotel, where they are escorted to the kidnapper's room. 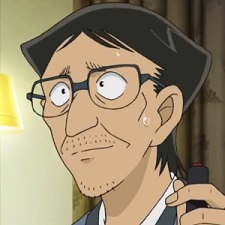 The kidnapper's face revealed to be Tanimori. 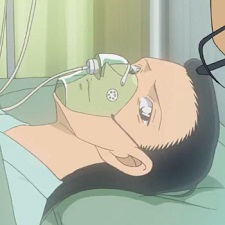 The motive for the kidnapping was for his wife, Keiko, who has died of illness.

Shukichi and the group confront the culprit, Tanimori, at Hotel Hyde Pride. Ten years ago, Tanimori was desperate to win a Shogi match against Shukichi in order to provide his wife, who was terminally ill, with better treatment. However, in his zeal to win he made an impulsive mistake, which forced him to forfeit since he moved twice in the same turn. Shukichi, knowing about his emotional distress, denied Tanimori a post-match discussion to allow him to visit his wife before she died. Misunderstanding the intention behind his parting words, Tanimori became obsessed with beating Shukichi in a replay of that fateful match, kidnapping Yumi to face him alone. However, Shukichi proves that Tanimori would have lost even in a fair match, and Tanimori surrenders to the police.

Upon awakening from her drug-induced sleep in which Tanimori had kept her, and learning about her liberation by his hands, Yumi (along with Naeko and a number of police officers who are fans of Shukichi) hurriedly escorts Shukichi back to the conclusion of his match, where she kisses Shukichi as a good luck charm, although she remains blissfully ignorant of both his true profession and the nature of the match. He returns to Yamanashi in time to win his 7th shogi title. Strangely, this victory also garners the undivided attention of both the unknown child and Subaru Okiya.

Differences between manga and anime[edit]

For the full gallery see: Taiko Meijin's Match of Love/Gallery