The Forgotten Memento from the Crime

The Forgotten Memento from the Crime (犯罪の忘れ形見 ,Hanzai no Wasuregatami?) is the 269th and 270th episode of Detective Conan anime.

A man seeks out Kogoro Mouri to help find his passed wife's wind-up watch in his apartment. Thinking it's a ridiculous request, Kogoro refuses, and instead Professor Agasa and the Detective Boys offer help. When everyone arrives in his house, a woman knocks and asks for the money the man loaned. He returns part of it and lets her borrow a film she has been looking for. As she was eager for seeing it, she begins to watch it right there in the video room. Conan finds the watch, which is still working even though it's supposed to be stopped. The woman is found dead and the tape in the VCR rewound.

As an aside, Detective Takagi tells Conan that someone stole all of Kogoro Mouri's police case files on the day of the busjacking case from the Tokyo Metropolitan Police Department. Despite what the circumstances look like, Conan does not think that Idetsuki was attacked by a burglar. When he notices the scent of burnt flowers, he finds the hidden truth of the crime scene.

Show spoilers »
With the help of the Detective Boys, Conan delays Morita from being at the scene while setting up the trick. By getting Megure, Takagi and Agasa to demonstrate the method behind the murder and reveal that it is in fact Hideo Morita who had murdered Idetsuki.

Morita confess that he killed Idetsuki for persuading his late wife to invest in the stock market, drowning her in debt, and was responsible for her suicide-accident. She had told him the truth the day before her death and took off the watch because she didn't want it to be destroyed along with her. Morita was then taken into custody.

After solving the case, Conan rushes home to Ran, fearing that members of the Black Organization were the ones who stole the material on Kogoro's investigations and that Kogoro is being constantly monitored. Upon arrival, Conan discovers that his suspicions were unfounded and that Ran is fine, but Conan does not recognize that someone is really watching the agency: Shuichi Akai. 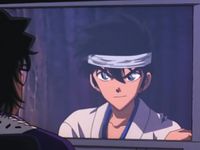 For the full gallery see: The Forgotten Memento from the Crime/Gallery