The Mystery of the Water-Flowing Stone Garden

The Mystery of the Water-Flowing Stone Garden (水流るる石庭の怪 ,Mizu Nagaruru Sekitei no Kai?) is the 282nd and 283rd episode of Detective Conan anime.

Kogoro, Ran, and Conan are driving in the mountains when they run out of gas and are kindly picked up by Michiyoshi Majima, the director of Kiyama Furniture Company where they saw the rock garden made by the former director of the company, and met Ayaka Honjo, the housekeeper of Majima's mansiom, Masayuki Hashimoto, his private secretary, Nobuaki Endo, director of Kiyama Interior, and Tomonori Kiyama, a freelance writer of a travelling magazine and director Kiyama's son. Most of the people that work for him and live with him seem to hate him, seem might revenge for Director Kiyama's death, so it isn't a surprise when Majima turns up dead the next morning in the beautiful house rock garden.

However, by the dead body, there are no footprints. Could this be an impossible crime?

Inspector Sango Yokomizo arrives on the scene, and begins an investigation. Kogoro accuses one of Majima's friends and workers, Masayuki Hashimoto who was in debt, but is quickly proven wrong. He then accuses Endo, one of Majima's company managers.

The police find a threatening note in the trash from Endo to Majima saying to meet on the roof which seems to implicate Endo further. Kogoro says that if Endo tied a rope around the body and used a bow and arrows, it would have been possible to lower the body without a trace. The police go to look for evidence of the arrows and rope, and Conan is shocked when they actually find it because the position the body is in makes it impossible for that trick to have been used.

Show spoilers »
After this fails, Conan stuns Kogoro with his watch, and tells everyone the real trick. The crime was probably committed around 8:30 PM, the culprit tied a rope to the air mat, and floated Majima's body on the water. Soon after, drainage began and the water receded and right before the air mat hit the sand, they shoved Majima's body with the picking rod, while pulling back the air mat with all their might. With that, it was possible to place the corpse in the middle of the rock garden without a trace. Incidentally, marks were left on the rocks at the edge of the pool when the air mat was dragged out and at that time it was probably washed out from Majima's pocket and a ticket to the photo exhibition ended up stuck in the drain. The culprit probably panicked when they suddenly came by, if Endo cancelled his plans it would have been all for nothing that was why when Endo was supposed to meet with Majima, the culprit took them outside, and declares Tomonori Kiyama did it. After Kiyama left the dining hall, he did not return to his room but went to the main wing of the house and killed Majima. Ayaka was still in the dining hall, so there was no worry that he would be seen and to float the body in the rock garden, Kiyama just kept waiting for Endo to close Ayaka's curtains. In brief, Endo intended to conceal Majima's movements but had assisted in Kiyama's criminal act instead. And on the air mat, there's something on it, it was from the momento that he said never left his side ink from his father's fountain pen. Kiyama confesses and reveals Majima murdered his father, the previous director of the company, Majima messed with the brakes and had his father fall to his death and while his away, he made himself the director and took over his father's company, When he learned of that, he thought he would kill Majima one day, with his own hands. Endo gave him the perfect opportunity to do so, and he consecrated his corpse to the rock garden that his father loved. 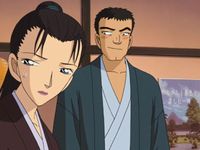 For the full gallery see: The Mystery of the Water-Flowing Stone Garden/Gallery