Eiichi Yamagishi (山岸 栄一 ,Yamagishi Eiichi?) is the alter-ego of eponymous mangaka Eiichi Yamagishi, an assistant of Gosho Aoyama who appears in several of his series. He's known to most Detective Conan fans as the manager of Yoko Okino, who's also based on a mangaka and past senior student of Gosho and Eiichi from the Ekoda Campus of Nihon University. He also got cameos in other Gosho works, like WALK MAN, Magic Kaito, Yaiba and 3rd Base 4th, additionally to the spin-offs Zero's Tea Time and Hanzawa the Criminal, made by other people.

In Detective Conan, Eiichi Yamagishi is portrayed as a rather silent person who tries to stay in the background of things and shies away from attention, as seen by his actions, when he tried to remove evidence from an active crime scene on the hunch alone that Yoko could be guilty and was the most vocal about trying not to drag the media's attention to the whole thing, even asking not to call the police when Akiyoshi Fujie's corpse was found.

Eiichi Yamagishi is one of the people tied to the large log in the alternate dimension, getting threatened by a giant dragon.

Gosho Aoyama's assistants appear as several animals in Kaito Lupin's and Aoko Holmes' classroom, with Eiichi Yamagishi looking like some kind of Kitsune.

Eiichi Yamagishi serves as cameraman during the "filming" of the Magic Kaito chapters from volume 1 during the Omake.

Eiichi Yamagishi is one of the staff members getting "the gate for the other series" for a remodeling of Akako Koizumi's residence into the Kudo residence. Kaito Kuroba is flabbergasted that Gosho's just recycling settings.

Yamagishi, Gosho and Tani getting confronted by Kumo-Otoko in Yaiba.

Eiichi Yamagishi, Gosho Aoyama, and Yutaka Tani enter a restaurant with "free food", actually a trap by Kumo-Otoko, disguised as the head cook, for Yaiba Kurogane and his friends. Kumo pulls out a couple of kitchen knives and scares the unwitting trio away before his actual targets arrive. 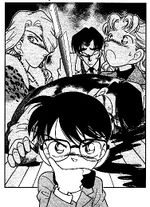 Yamagishi as one of the three suspects.

Eiichi Yamagishi appears as Yoko Okino's manager and serves as one of the suspects during this case.

Eiichi Yamagishi reappears, in the anime only, in Yoko Okino's tow as her manager again at Beika Shrine, because a movie featuring her was currently filmed there.

Eiichi Yamagishi returns as Yoko Okino's manager during this chapter.