Hiroshi Agasa (阿笠 博士 ,Agasa Hiroshi?), most commonly referred to as Professor Agasa (阿笠博士 ,Agasa-hakase?), and known in the Funimation dub as Hershel Agasa, is a character in the manga and anime franchise Detective Conan. Agasa is Shinichi Kudo's next door neighbor and family friend. The first person to learn Shinichi is Conan Edogawa, he has invented all of Conan's special gadgets as well as the Detective Boys' badges. Read more...

Hidemi Hondou (本堂 瑛海 ,Hondō Hidemi?), also known by her alias Rena Mizunashi (水無 怜奈 ,Mizunashi Rena?), and by her Black Organization codename Kir (キール ,Kiiru?), is a character in the manga and anime franchise Detective Conan. Hidemi Hondou is an undercover CIA agent who has managed to infiltrate the Black Organization under the codename Kir. She has a younger brother named Eisuke. She was forced to kill her father, Ethan Hondou, who was also in the CIA, after a mistake nearly caused her to lose her cover in the organization. Read more...

Subaru Okiya's allegiances, goals, and true identity -if he has one- have not been officially revealed in manga canon. One of the most popular fan theories is that Okiya is Shuichi Akai who has faked his death with Rena Mizunashi's and Conan's help. To try to prove this, some fans have compiled clues and logical arguments that they believe show Okiya is really Akai and not Bourbon or another character. Read more... 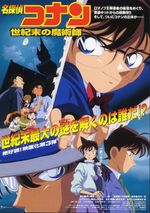 The Last Wizard of the Century is the third Detective Conan movie and the first to feature Kaitou Kid. Kaitou Kid attempts to steal a newly discovered Fabergé egg, only to be nearly killed by the mysterious sniper Scorpion. Conan has to solve the puzzle behind the mysterious egg, reveal the true identity of Scorpion before it is too late, and avoid the suspicion of Kaitou Kid who lurks nearby. Read more...