The first volume of the Detective Conan manga was released on June 18, 1994 in Japan. It has since been published in more than sixteen languages. Teenage detective prodigy Shinichi Kudo is transformed into a six year old child after being force-fed a mysterious poison. Using the alias Conan Edogawa, Shinichi moves into the house of his childhood crush, Ran Mouri, and her bumbling private investigator father, Kogoro Mouri. Read more...

Recently featured: The Last Wizard of the Century - Vehicles in Detective Conan

Recently featured: Volume 1 - The Last Wizard of the Century

Very little is known about the mysterious boss who leads the Black Organization. Simply called ano kata (あの方 ,That Person?) by his subordinates, the true identity, gender, and age of the boss are completely unknown. The boss's phone number sounds like the children's song Nanatsu no ko when dialed. Gosho Aoyama revealed in an interview that the boss's name has appeared somewhere in the manga. Read more... 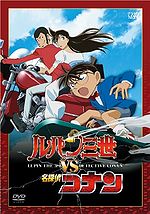 Metropolitan Police Detective Love Story 8: The Left Hand's Ring Finger is the 487th episode of the Detective Conan anime, aired October 15, 2007. It focuses on the developing romance between Miwako Sato and Wataru Takagi. A poisoning murder case occurs involving writer's ring filled with diamonds, but Takagi can't focus on the case because Sato is wearing a ring on her left hand's ring finger! Read more... 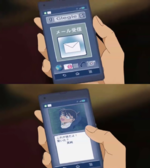 Akai family's middle brother is the yet unknown brother of Masumi Sera and Shuichi Akai. The unknown brother is older than Masumi, but younger than Shuuichi. Masumi characterizes him as smart relative to her "strong" brother Akai; he is adept at solving cases according to his former classmates. There are many fan speculations who this brother might be. Read more...

Suguru Itakura was a very famous CG graphic designer and games system engineer before he was murdered by a client while gathering money to escape from the Black Organization. Itakura had quit work on a certain program he was developing because of his waning eyesight, but the Black Organization agents Tequila and Vermouth contacted him and demanded he finish. Before he was killed, Itakura left a mysterious diary entry about why he did not want to finish his program: I can’t. I refuse to finish it. I know this program mustn’t be completed, not because of my vision, but for the sake of humanity. Read more...