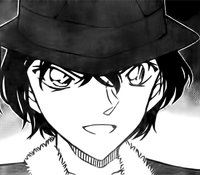 Masumi Sera (世良真純 ,Sera Masumi?) is a self-proclaimed high school detective and practitioner of the martial art Jeet Kune Do. After making an mostly correct deduction during a murder case, she transfers to Ran's high school class. She seems to know that Conan is a detective. Read more... 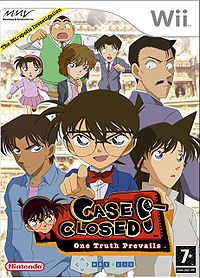 Case Closed: The Mirapolis Investigation is a game for Nintendo Wii. This is the only Detective Conan video game so far to have been released in English in Europe but it has not been released yet in North America. Kogoro receives tickets to the grand opening of the Mirapolis complex and is unwittingly forced to take along Ran, Conan, and the Detective Boys. At the opening speech, tensions run high as the Mirapolis staff begin to let their past with the owner get the better of themselves. Soon after, Conan and Ai discover a body by the Mirapolis's pool. With a little help from Heiji, it's up to Conan to solve the murder and prevent anything else from happening. Read more... 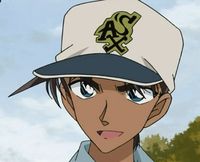 Heiji Hattori (服部 平次 ,Hattori Heiji?), also known as Harley Hartwell in the Funimation dub, is a character in the manga and anime series Detective Conan. He is a childhood friend of Kazuha Toyama. Heiji is the son of Heizo Hattori, chief of the Osaka Police Department, and his wife Shizuka Hattori. Heiji wants to become a detective, and his father is very supportive of this, helping him solve tough cases. However, his father has given him tough love, though mostly for the sole purpose of having Heiji get him to bring a suspect out. Heiji is also very skilled in kendo and has become a favored tournament contender for his school. Read more... 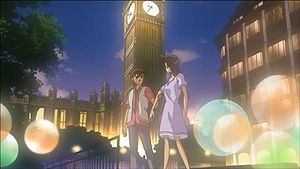 Ran Mouri is Shinichi's childhood friend and canonical love interest. They have known each other since kindergarten and have been playmates since, which caused some censure from Ran’s mother, Eri Kisaki.They are very close to each other; as they have always been together since their childhood years all the way to their second year of high school. Both Ran and Shinichi have somewhat of a love-hate relationship before Shinichi 'disappeared'. However when Ran meets Conan (who is Shinichi, although she's unaware of this fact), she tells him that she has been in love with Shinichi for a long time- probably since they first met, which of course causes Shinichi/Conan to blush. Conan (Shinichi) is currently living with Ran and her father, Kogoro Mouri in his detective agency. Since living with them, 'Conan' has solved many cases in Kogoro’s place without him noticing, making ‘Sleeping Kogoro’ a household name. Read more...

Tooru Amuro (安室 透 ,Amuro Tooru?) is private detective who first appeared posing as a waiter while helping a client with a case. He currently works at Café Poirot, and has become Kogoro's apprentice.Amuro is a free-lance private detective who also maintains employment on the side that may aid in investigation, like his part-time job as a waiter at Ristorante Sundayrino. After his introductory case, Amuro begins working part-time at Café Poirot. He is currently Kogoro's apprentice. Read more...