This is a list of real life buildings, places and other surroundings Gosho Aoyama used as reference models for the settings appearing in the Anime of Detective Conan. 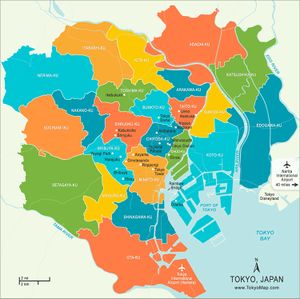 The Coded Map of the City Case

Anime Episode 4: The Coded Map of the City Case

"Tohto Tower" of course is Tokyo Tower in anything but name. It goes on to become a recurring location, implied to be very close to Beika and Haido, maybe even part of it in the world of Detective Conan.

The "Tenkaichi Festival" in Saitama which Conan Edogawa, Ran and Kogoro Mouri go to is based on the Gozan no Okuribi, also known as "Daimonji", in Kyoto, which is also mentioned by Conan during the episode.

A Crab and Whale Kidnapping Case

The Secret of the Moon, the Star, and the Sun

Kurisuke Agasa's mansion is modeled after the "Ohana Estate" mansion in Yanagawa City, located in the Fukuoka Prefecture.

The Gathering of the Detectives! Shinichi Kudo vs. Kaitou Kid

Anime Episode 219: The Gathering of the Detectives! Shinichi Kudo vs. Kaitou Kid

This incarnation of the clock tower is situated in a surrounding clearly modeled after the port area of Yokohama City, even though it's still implied to be in Tokyo, which is somewhat right, considering that Yokohama is part of the Greater Tokyo Area. One can partly spot the top of the Yokohama Landmark Tower behind the two buildings to the left, as well as the silhouettes of some of Minato Mirai 21, including the sail-shaped Bay Grand InterContinental Hotel. The park in the front is based on the Yamashita Park, located in the Naka Ward of the city, even though the mansion with the clock tower is based on a different model, which was placed into the park for the Anime.

That building Kaito Kuroba and Aoko Nakamori had their first meeting in front of and which is the focus of Kaitou Kid's heist is based on the clock tower of the Koriyama Public Hall in Koriyama City, located in the Fukushima Prefecture, just like it was in the Magic Kaito chapters it is based on, with the main differences being that the upper part was changed to the place where the bell is integrated, a bigger clock face and more distance between the clock and the windows. The clock was removed for a long time until it was reintegrated into the tower in 1998, possibly inspiring Gosho Aoyama to his original story in 1999.

The "Kurashiki Tivoli Park" (倉敷チボリ公園) appearing in this episode was a real park in Kurashiki, modeled and named after Tivoli Gardens in Copenhagen, Denmark. The Japanese version of the park closed in 2008.

The place Professor Hiroshi Agasa, Conan Edogawa, Ai Haibara, and the Detective Boys drive to is the Horikirimizube Park at the first block of the Horikiri District(jp) in the Katsushika Ward of Tokyo, with the Arakawa doubling as Teimuzu River in Detective Conan. The aforementioned park indeed is a popular spot for kite flying competitions in real life. The bridge sporting these distinct Y-shaped concrete pylons seen several times next to the park in the same case, on the other hand, is the Shin-Arakawa Bridge.

The cinema Kogoro Mouri and Eri Kisaki go to at the end of the case is modeled after the Cinemas Q in Naha, Okinawa Prefecture, in real life on the island of Kyushu.

The Kendo Tournament of Love and Mystery

Anime Episode 916-917: The Kendo Tournament of Love and Mystery

The kendō tournament Heiji Hattori, Soshi Okita, and Takeshi Onimaru partake in during is organized in Tohto Gymnasium, which is based on the real Nakano Gymnasium, located at the fourth block Nakano District(jp) in the ward of the same name, Tokyo.

The "Danny's" Rei Furuya, Conan Edogawa, and the Detective Boys are stopping by to eat and discuss their hunt for the phone strap is a real Denny's restaurant, the one at the first block in Yokohama's Kitayamada District in the Tsuzuki Ward (Kanagawa Prefecture), to be specific. Considering they must have passed Yokohama to reach Chiyari Station, it is a fitting location to stop.

First, Aquavit is killed by Chianti while being close to the top of the CN Tower, which is situated at 301 Front Street West in the Downtown of Toronto, capital of the Ontario Province in Canada. During the aerial shot, a lot of distinctive features of Downtown Toronto can be seen, like a part of the Rogers Centre in the lower left, as well as the Ritz-Carlton Toronto, Simcoe Place and the RBC Centre skyscrapers.

Then Stout is shot by Korn on Bridge Street in the City of Westminster (Inner London) in London (England, United Kingdom). The Portcullis House is visible next to the Palace of Westminster and its famous Elizabeth Tower.

Lastly, Gin and Vodka ambush Riesling on the Museumsinsel in the Spree River in the Mitte Locality, which is part of the borough of the same name in Berlin, Germany. Vodka is standing right next to the Pergamon Museum, with a Stadtbahn bridge and the Bode Museum in the background. Afterwards, Gin is standing in front of the Friedrichs Bridge, with the Faculty of Theology of Humboldt University, the SpreePalais and the Television Tower visible.